A Biography of a Chance Miracle by Tanja Maljartschuk 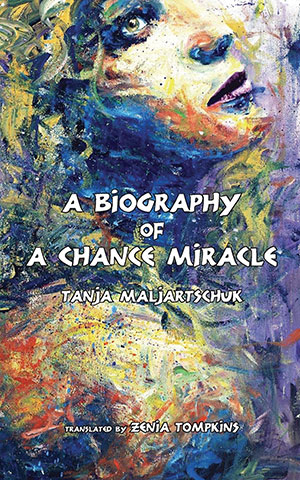 Tanja Maljartschuk’s A Biography of a Chance Miracle is a deceptively complex take on post-Soviet Ukrainian culture. Maljartschuk, known in Ukraine for her fairytale-like allegories, employs simplistic language and a juvenile narrator to conceal a multilayered critique of the wild consumerism, blind obedience to dogma, and lack of faith in structures of authority that filled the vacuum left by the receding welfare state in the 1990s.

The casualness with which Maljartschuk’s protagonist, Lena, discusses brutality and violence makes her world seem all the more brutal and violent. This is a society in which grandsons beat their grandmothers, husbands rape their child wives, anarchists ravage bookstores, and few people think twice. But perhaps this is because these people are simply hard to surprise: there’s a sort of magical-realist quality to their daily lives that presumably results from the absurdity of living under totalitarianism.

To the extent that Maljartschuk is making a point—and she is—she seems to be reminding us that multiple layers of oppression can exist at once and that victims can also be executioners. Certainly, there is a hierarchy of needs, but the “smallest” ones are often a litmus test of society’s true values. Violence seeps down to the humblest levels, often manifesting in bizarre ways (a dognapping ring, for example). Recognizing this as an injustice does not invalidate the “larger” injustices occurring within the system. Rather, it brings violence in all its multiplicity to the fore.

Unfortunately for us, there is a particularly Ukrainian wryness in Maljartschuk’s prose that is funnier in the original than it is in English. This is less a matter of linguistic than cultural translation. Biography operates on a number of levels in the original; taking it out of its native context diminishes its power, but only slightly. It remains a story of an unlikely hero taking on unlikely causes and, ultimately, offers the reader a darkly humorous take on life and hope in a failing state.