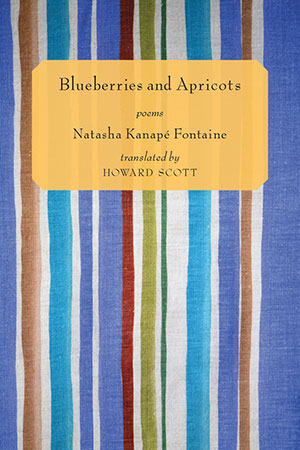 In her first English-translated collection, Assi Manifesto (see WLT, Jan. 2017), Natasha Kanapé Fontaine reached back into ancient tribal- and earth-time in order to reanimate land-based communal wisdom for use today. In Blueberries and Apricots, Fontaine gathers her collected wisdom, wraps it in caribou hide, and carries it into the future. The poems are written primarily in the vatic mode: “We will gather / the invisible wealth / lost between the cities / will chain up the monsters of history.” Many poems are incantatory as well—ritual medicine in their presentation and intent, often signaled by the use of anaphora: “spell me the name of my land / spell me the name of my mother / my eyelids have been closed / for too many centuries . . .”

However, the most compelling poetic strategy in the collection is Fontaine’s use of the erotic as a community-enacting force of political engagement, as Adrienne Rich described it: “Poetry can break open locked chambers of possibility, restore numbed zones to feeling, recharge desire” (What Is Found There). Threaded through the collection, the “I” (which is land/people/flora/fauna/speaker) figures the present-and-future strength of the poet’s tribal community in terms of women’s sexuality, sensuality, and regenerative force. As Rich would have it, the poems are both political and personal; they reveal “how we are—inwardly as well as outwardly—under conditions of great imbalance and abuse of material power” (What Is Found There). Moreover, “the people” in these poems are not only the poet’s Innu people but also indigenous peoples around the world whose lives have been diminished by colonization.