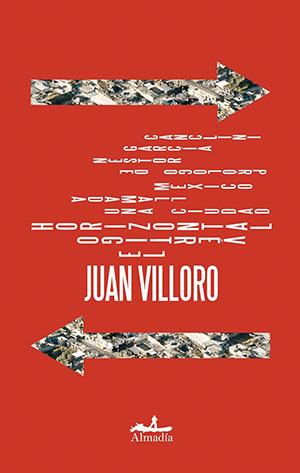 El vértigo horizontal, by the Mexican writer Juan Villoro, is designed as a cartographic map of the Mexico City subway with different lines and intersections. The lines lead to different descriptions of how to live in the city, characters of the city, crossings, places, and ceremonies. The index that is designed as a trip in the subway allows readers to read the book in three different ways: linear (from beginning to end), by the routes indicated by the writer on the index map (in the style of Cortázar and his Rayuela), or in the order that the reader wishes.

The nonfiction book could be categorized as the writer’s masterpiece not only because it portrays Mexico City in an extraordinary way, or because of its unusual structure, but because it is written with different literary genres such as crónicas, essays, and hybrid texts. The genre that predominates is the crónica, also known as the journalistic chronicle. The crónica oscillates between literature and journalism. It is a hybrid genre, and therefore some texts in the book could be classified as follows: essay chronicle, story chronicle, poetic chronicle, historical chronicle, biographical chronicle, and other categories. In addition, Villoro embellishes some of those literary genres with an eroticism unexplored in his previous nonfiction writing.

Several characters appear in the book, but the main character is the city itself. The writer shows a subjective interpretation of his city, an inherent city to him. He gives a radiographic image of specific places such as monuments, skyscrapers, housing units, streets, and neighborhoods. He creates an encyclopedia of different problems that are endemic to the city, such as contaminated water, roads, earthquakes, landslides, environmental pollution, economy, and children living on the street. He sketches different typical and atypical personalities of the city and describes and analyzes identity, customs, food, and Mexican cinema. That is, he portrays the city as it is, with its diverse artistic, political, religious, social, and cultural themes.

Villoro’s great achievement in El vértigo horizontal resides in his ability to understand and make the city known through different characters, occupations, and beliefs. Although many writers have been interested in Mexico City, such as Carlos Monsiváis and Carlos Fuentes, Villoro finds a new, postmodern way of portraying the contemporary city.