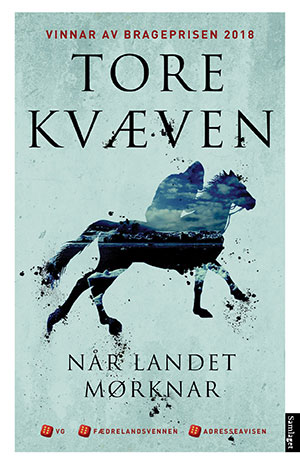 Når landet mørknar (When darkness falls over the land) is a powerful historical novel, but it also has the visionary qualities that mark it as a great work of literature. The winner of the 2018 Brage Prize, Norway’s most prestigious literary award for fiction, this novel relates momentous events, from the first, baffling episode inside the mind of a hunted, wounded walrus, to the final episode in a young man’s struggle against fate. The core story is about love, bravery, and feuding set among people who are trapped and threatened by the environment they have exploited; the sparse language, rooted in the Icelandic sagas, evokes the vengeful beauty of land and sea. The narrative is shot through with strands of mysticism, but painstaking background research makes it more persuasive than any fantasy dystopia.

The “land” of the title is real: Greenland. The time is 1293, and, in the north, the Little Ice Age is beginning. With it begins the end game for the community of Norwegian Vikings that has colonized the southwestern coast. For the past three hundred years, the settlers lived well, farming and hunting on land and sea. Now, they see signs of a slow, murderous change. Deforestation halts the building of houses and ships, soil erosion means poorer harvests, and the most profitable prey is in sharp decline—even birds are scarce. In the first of many unforgettable scenes of life on the edge, the men climb into their aging, dilapidated boats to hunt a solitary walrus. They know the risks—and as we know, so does the walrus.

During the chase, fifteen-year-old Arnar distinguishes himself, but Eir, a girl he falls in love with, looks at him with scornful eyes, full of pity for the killed creature. Arnar is a wonderful hero to follow as he maneuvers to win over Eir and acquire a farm of his own. The latter dream is fulfilled when he trades his stockpiled driftwood in exchange for a farm. Bergfinn, its owner, needs a seagoing ship to save his large household from death by starvation. Bergfinn’s enterprise is doomed, however. The sea goddess Ran smiles with white teeth as his primitive ark sinks in the cold, raging sea. Nature’s ways of revenge are terrible, but people can match each one, death for death. Arnar, for one, is the target of too much envy and resentment, driven by tribal hatred and religious schism, to be the savior he might have become. Somehow, it feels only too plausible.

Everything in this remarkable book has the ring of truth.