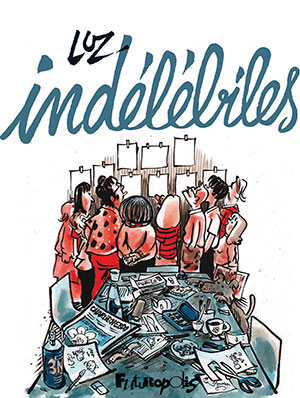 Renald Luzier (“Luz”) started drawing for the satirical magazine Charlie Hebdo in 1993 and eventually became one of its best-known cartoonists. On Jan. 7, 2015 (his birthday), the fact that he was late for a meeting at the magazine’s office in Paris saved his life. The jihadi terrorist attack that targeted the journalists and cartoonists of Charlie Hebdo left twelve people dead and eleven wounded. Luz produced a very dark bande dessinée or graphic album in the aftermath of the massacre: Catharsis (Futuropolis, 2015). Indélébiles is a very different work. In a much lighter tone, Luz tells the story of the magazine’s development and of his interactions with his colleagues and friends, many of whom are still famous in France: Cabu, Wolinsky, Charb, Gébé, Catherine Meurisse, etc. The terrorist attack itself is noticeably absent from this graphic novel. Instead, a concluding dreamlike sequence brings back, in a festive atmosphere, all those who participated in the publication of Charlie over the years.

Luz’s pictorial memoir is in part an homage to the fellow cartoonists with whom he worked for about twenty years. It is also a description of the creative process of a group of satirical artists who covered many different topics over the course of their careers. One of the most fascinating is the detailed report on the appalling living and working conditions meted out to prisoners at the infamous “Angola” state penitentiary in Louisiana. Another lengthy sequence describes Luz’s strange and sometimes-dangerous encounters during a cease-fire in war-torn ex-Yugoslavia. Luz also touches on one of his early series of comic strips, titled Les Mégret gèrent la ville, which ridiculed an extreme-right-wing French politician. Much of the narrative is devoted to portraits of older and well-established cartoonists, such as Gébé and Cabu, who served as Luz’s mentors during the early phase of his career and who are lovingly and humorously evoked as they produce their own works.

Indélébiles reflects social and cultural events and trends during roughly two decades of French history, from the socialist presidency of François Mitterrand to that of François Hollande, with the right-wing presidents Jacques Chirac and Nicolas Sarkozy in between. Unsurprisingly, there are reports devoted to street demonstrations against racism and police brutality. Luz, the somewhat innocent provincial young man who moved to Paris in search of a job, gets his first taste of tear gas and of charges by the CRS riot police.

Overall, Luz’s lengthy graphic novel is a consistently amusing, sometimes moving account of the heyday of an irreverently satirical magazine, before it unwillingly became a worldwide icon.