From a Shepherd Boy to an Intellectual: My Memories by Kancha Ilaiah Shepherd 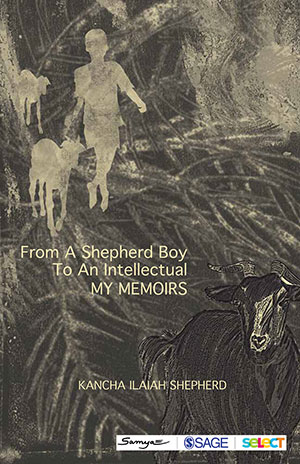 Those who are aware of anticasteism and lower-caste empowerment movements in India will certainly be familiar with Kancha Ilaiah Shepherd. His books attack the hegemonical caste structure headed by the priestly caste “Brahmins” and other twice-born castes. They have been controversial and thus hotly debated, even banned in certain school and university curricula. However, they are widely read by the slowly but firmly emerging masses, mainly constituted of the lower castes. After the success of Why I Am Not a Hindu and the following works such as Post-Hindu India and his only novel, Untouchable God, Ilaiah Shepherd’s autobiography, From a Shepherd Boy to an Intellectual closes the circle. It seems to me that his entire oeuvre coheres as a single piece, as they have developed and matured in every following work. Hence, My Memoirs serves as a culmination of his writings and is a must-read.

His writings, heavily experiential, narrate the trauma of a lower-caste individual growing up in independent India, which is moving toward Hindu nationalism at each step. He sees danger in the hegemony of Brahmins and other twice-born upper castes that dominates the discourse on the nation. Though, as a political scientist, Ilaiah Shepherd’s observations are based in empirical fact, he still looks with agony and anger at the suffering of his fellow caste members, who are 80 percent of India’s population and ruled by the upper castes. His words hit hard while reading, for the lower castes as well for the upper castes.

Ilaiah Shepherd underscores that none of the lower-caste leaders and intellectuals have ever written autobiographies, including Bhimrao Ambedkar and Mahatma Phule. With his memoir he intends to send a wider message of self-respect, emancipation, and dignity. Ilaiah Shepherd declares writing to be the only medium that can change the lower castes’ condition in India. Beginning the book with the question “Is Ilaiah an Unworthy Name?” he enables the reader to explore the epistemological violence visited upon the lower castes and presents a counternarrative to Gandhi’s vegetarian India. The book is a valuable political, social, and anthropological document for understanding the caste system in India. Ilaiah Shepherd participated in the UN conference against racism, racial discrimination, and xenophobia in Durban in 2001, and a chapter in the book explains his observation of casteism among Indians abroad. His take on caste and class is worth reading, as the former takes preeminence in the South Asian context. For those who want to understand India from below and beyond Gandhi, yoga, and Bollywood, From a Shepherd Boy to an Intellectual is an indispensable resource.