Green Is the Colour of Memory by Huzaifa Pandit 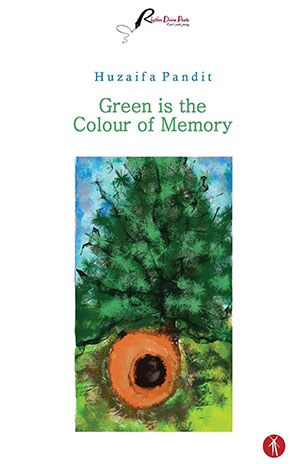 Huzaifa Pandit lives in Kashmir, India, a region under turmoil from two hostile nations that have kept this beautiful land locked in. Never a day goes by without shouts for “Azadi” (freedom) ringing out on the streets of this heaven on earth. Battles break out constantly between Indian security forces and gun-wielding “terrorists” or stone-pelting schoolgirls. Naturally, like any poet living in a contested land, Pandit’s poems also reflect this anguish.

Pandit’s poetic journey, therefore, sends him in two directions, one toward a direct confrontation with the security forces like “Death in February,” where he writes, “Obituaries / that seek asylum from winter drought / in lost samovars of salted tea / at funerals to thirsty mourners.” Another way is to write of exiled poets like the Kashmiri English poet Agha Shahid Ali and spell it out: “I know I want to write a poem, but the futility of it / I can’t read, you can’t read.” “What does one do when plastic rainbows / pellet your lamenting lungs? / What does one do when amputated houses / grate against wilted coffins?” The bodies/coffins are really a nation torn asunder.

These two distinctions set Pandit apart from the native and extranative Kashmiri poets, but, beneath the veneer of sorrow, he has a disguised sense of humor when he doesn’t talk about Kashmir at all in a poem entitled “Bedside Tales from Kashmir.” This is rare because his main concern is the Indian military and the besieged city of Srinagar where he teaches. In “Testimony in February,” he asks of the poet Ahmed Faraz, “We forgot your name / Won’t you silence our conversations?”

For a poet living in a city under suppression by the Indian state, “Green is the colour of memory specked / with shades of yellow grey.” Pandit is emphatic that “The parchment of my heart / is empty, quite empty.”