The Houseguest and Other Stories by Amparo Dávila 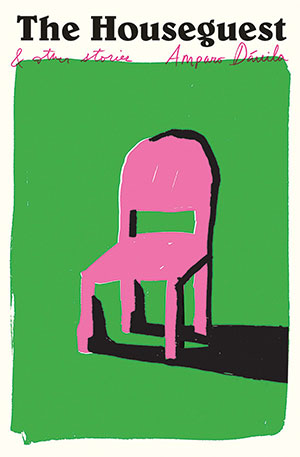 At ninety-one, revered Mexican writer Amparo Dávila has had a long and illustrious life in letters. Born in Zacatecas in 1928, she went to the nation’s capital in 1966, where she worked for a time as secretary to Alfonso Reyes, who encouraged her to publish. In the 1950s and ’60s, few Mexican women were acknowledged as literary talents: Rosario Castellanos and Elena Garro were the exceptions. Many of Dávila’s stories have female protagonists who are driven to insanity by their inability to escape oppressive social situations. In “The Houseguest,” the story that lends its title to this collection, a woman’s cruelly controlling husband brings a stranger home to live with them. The man stalks and terrifies the wife, her children, even her maid. Their dramatic solution to the problem is typical of the author’s narrative style.

Dávila began as a poet, but it is her stories that gained her fame. Her first collection, Tiempo destrozado, was published by El Fondo de Cultura Económica in 1959. In 1977 she won the prestigious Xavier Villaurrutia Award. Lately her work has enjoyed a revival, yet The Houseguest brings her stories to English-language readers for the first time.

This is a book that will stay with you. Readers of Dávila’s stories find it difficult, perhaps impossible, to forget them. Many begin in the tradition of Uruguayan writer Mario Benedetti, as traditional tales about ordinary people: office workers, an unhappily married woman, a man devoted to his brother who has just died. The narrative begins to create a mood as it seems to unfold without surprises. Then, suddenly, an unsettling world is revealed. I am tempted to speak of magical realism, so ubiquitous to Latin America, or to reference Kafka and Poe. But Dávila’s voice is entirely her own. Master storyteller Julio Cortázar called her stories extraordinary.

The Houseguest opens with “Moses and Gaspar,” originally published in Spanish in Dávila’s first book, Tiempo destrozado. We know the title characters are animals, probably dogs, but the author never tells us this directly. Moses and Gaspar make their feelings known by refusing to eat, moping, crying, and even violently tossing furniture around in the apartment in which they are locked up during the day. But they also put furniture and household items back where they belong before their guardian comes home from work. This detail is given in the same matter-of-fact prose as the previous details. By story’s end we have been entrusted with characters, plot, and an ending strange enough to erode our sense of balance.

Dávila lost her three brothers to illness while still young herself. She took refuge in her father’s library and lived in books. Her childhood was marked by fear, and that fear is palpable in everything she writes. Insanity, danger, and death appear as living characters in her stories. Violence, quiet or explosive, inhabits them. It is surprising that this important writer’s work has been so little translated to date; only an occasional story in an anthology or magazine. Audrey Harris and Matthew Gleeson have done a superb job, rendering to perfection not only the voice but its disconcerting mysteries.

New Directions has given us a beautifully put together volume that leaves us wanting more. I am only disappointed that the publisher opted to present the collection devoid of an introduction, translators’ note, or other accompanying text. Perhaps their idea is that the stories stand alone. And they do. But as this is Dávila’s first book in English, I would have appreciated some information about the author’s life and work, some attempt to situate her in place and time.