The Labyrinth of the Spirits by Carlos Ruiz Zafón 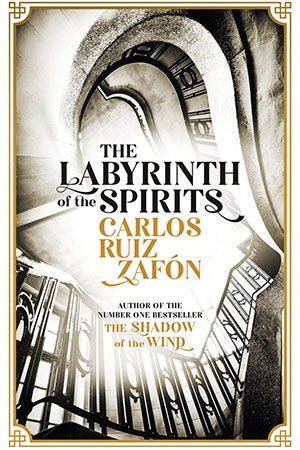 The Labyrinth of the Spirits is the fourth novel in a tetralogy by Carlos Ruiz Zafón that takes place in the literary universe of the Cemetery of Forgotten Books. It revisits familiar themes and characters while adding a femme fatale lead, who challenges the latent machismo of the last three novels. Alicia Rico is a detective for the Spanish secret police, and she is everything a woman in Franco’s Spain shouldn’t be: autonomous, sexy, and coolly detached. Through Alicia Rico, The Labyrinth of the Spirits takes up an important question: who is responsible for “righting wrongs” in the aftermath of a corrupt political regime?

At the beginning of The Labyrinth of the Spirits, Ruiz Zafón explains that he designed the novels in the Cemetery of Forgotten Books to be read in any order. His purpose is to enable readers “to explore the labyrinth of stories along different paths that, when woven together, lead into the heart of the narrative.” The Shadow of the Wind (2001) is the first novel in the series. It follows the story of Daniel Sempere as he investigates a mysterious Barcelonan author named Julián Carax. The next book is The Angel’s Game (2008), which takes place approximately a generation earlier and focuses on David Martin, a brilliant though troubled author. The Prisoner of Heaven (2011) is the third book in this series. It is the story of Fermin Romero de Torres, a popular character from The Shadow of the Wind, as a political prisoner in Montjuïc Castle.

The Labyrinth of the Spirits takes place in 1959/60s Spain, though Barcelona dominates the scenery, as it does in every novel in the series. The main plot centers on the mysterious disappearance of the minister of culture, Mauricio Valls, in November 1959. Alicia Rico investigates this case together with a policeman named Juan Manuel Vargas. Their detective work leads them from Madrid to Barcelona, where they unearth long-forgotten secrets with the help of the Sempere crew. Labyrinth is arranged into alternate chronologies labeled after liturgical prayers and the Catholic requiem mass: Dies Irae, Kyrie, Agnus Dei, Libera Me, and In Paradisum. This structure effectively showcases the ways the past is still present for the characters in the novel.

One way to read Labyrinth is to see it as a commentary regarding the roles of reading and writing. Not only do authors and readers figure prominently in the novel, but so do books. In this manner, the novel slyly gives us advice on reading through the Cemetery of Forgotten Books universe: one needs to be a literary detective to piece all the stories together.

Another way to read the novel is to remember a question that comes up frequently in Ruiz Zafón’s work: who is responsible for the wrongs of the past? Characters in The Shadow of the Wind, The Angel’s Game, and The Prisoner of Heaven are frequently at the mercy of powerful entities like wealthy aristocrats, corrupt government officials, and overbearing societal conventions. The Labyrinth of Spirits features characters who not only fight inequity but also expose it. Here is a notable example. Toward the end of the novel, Alicia Rico is given a beautiful fountain pen. She uses the pen only twice. The first time, she writes her name in flowing script. The second time, she stabs someone. Never has Edward Bulwer-Lytton’s famous adage “the pen is mightier than the sword” been truer and, perhaps, more necessary.