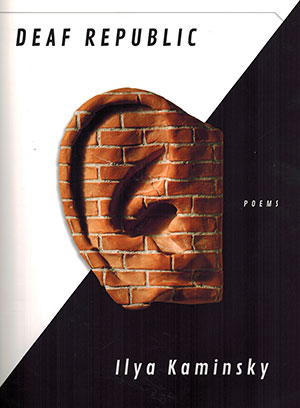 This book-length series of poems, Ilya Kaminsky’s second collection, is written as two progressively darkening acts of a play set in the imaginary town of Vasenka. The main characters are two puppeteers and a deaf boy, Petya. The town is in the midst of a military occupation.

Kaminsky’s language is accessible, yet it runs on a logic that feels of a different place. It sings with a necessary freshness. When Petya is killed early in the book, one poem tells us, “Our country woke up next morning and refused to hear soldiers.” Such emphatic not-hearing becomes a form of retaliation. Deafness turns out to be the only power the people of Vasenka hold against the invasion, and they wield it with all their might.

Sign-language illustrations appear intermittently throughout the book. We learn the signs for “Town,” “Story,” “Curtain,” and other simple words. This offers a respite, making the book appear as safe as a manual or a children’s story. The weight of what the poems tell us is almost eased. But behind these illustrations are palmfuls of tension as well as collective grief and anger.

Page by page, Kaminsky blends voice and silence, loss and need, often writing what seem like straightforward facts. Yet these facts are, from this talented poet’s pen, magical phrases detailing the dystopia. Deaf Republic is clearly shaped by his personal narrative—an early childhood in Odessa and a family history against the backdrop of the former Soviet Union. It is also shaped by his voracious attention to literature and vast understanding and awareness of the poetry of many cultures. The narrative is parceled out in lines and poems that expertly manipulate space. We can’t escape the horror because it exists again from a new perspective or on yet another page.

And, yet, there is joy in this harrowing story of fragility and limited rights. The poems of Sonya and Alfonso, the newlywed puppeteers, are sensory riches: “a drop of lemon-egg shampoo, / you smell like bees, // a brief kiss.” And later, Alfonso states, “She scrubs me until I spit soapy water.” It’s a deep pleasure to be the voyeur to their fervent ministrations.

Kaminsky’s phrases build a history for this imaginary town and beleaguered country. We can turn a corner, see it, feel it: “He is washing his hands, he is putting on red / socks, he is putting his tongue where his tooth has been” or “Wind sweeps bread from market stalls, shopkeepers spill insults and the wind already has a bike between its legs.” The intangible has a shape. The logical becomes image-dense with surprise. “Deafness is suspended above blue tin roofs . . .”

Kaminsky’s first book, Dancing in Odessa, was much acclaimed, and audiences have been eagerly awaiting the follow-up collection. In the meanwhile, he’s brought forth some magnificent anthologies, including The Ecco Anthology of International Poetry and A God in the House as well as translations of the poetry of Polina Barskova and Marina Tsvetaeva.

Deaf Republic is a parable about society and the impact of reaction. Kaminsky, who has been mostly deaf since age four, transmutes disability into strength in this new collection. The community action can’t hold against constant strife, uncertainty, and danger, though. Relationships fray and people begin to align to the personal sphere rather than the collective. While deftly describing an imaginary place, this book seems to dangle us over the precipice of the here and now, to push us to see the equal and opposite forces that reflect how broken we are and how we manage to go on. We see so clearly even how we turn away from what we can’t bear to see.

Deaf Republic proves that the healthiest among us are not necessarily “able” and that others with limitations might offer direction. The indomitable spirit of the townspeople—and of the poet Kaminsky—glistens in every line: “You will find me, God, / like a dumb pigeon’s beak, I am / pecking / every which way at astonishment.” There are remnants of hope in silence.