From Quetta to Delhi: A Partition Story by Reena Nanda 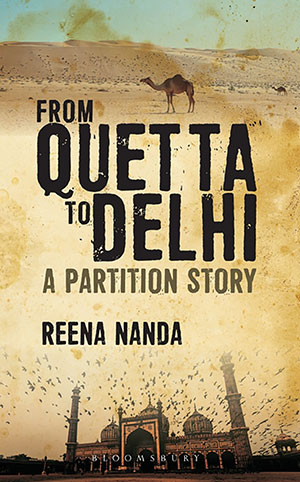 The ethnic cleansing and mass migration of Hindus and Sikhs from the provinces that became Pakistan in 1947 form an important current of twentieth-century history. The events played a key role in shaping modern India. Many novels and stories have been published over the years that depict the atrocities, terror, and violence of Partition, on one hand, and the trauma of the survivors on the other. Reena Nanda’s new novel is a somewhat different slice-of-life memoir. Memory and family history intersect time and space, and we are treated to a fascinating panorama of lost places and cultures from the vantage point of the author’s own family history.

Centered on the character of Shakunt, the author’s mother (Nanda was born in 1945 in Quetta), the family saga traverses the years from before Shakunt’s birth—starting with the arrival of Shakunt’s grandparents as settlers in Balochistan—to the family’s first two decades in Delhi as uprooted western Punjabi refugees.

The novel is structured around five main time periods marked by corresponding migrations and stases, each constituting a distinct phase of family memory and personal history for Shakunt. Six chapters unfold, the last one bringing us full circle: from “1947 – Exiled from Quetta” to “1947 – Quetta to Delhi: The Final Migration.”

In the substantial extant body of Partition literature, there are few, if any, accounts of the Punjabis of Balochistan. The British had introduced them into the region as traders, civil servants, clerks, overseers, and professionals—engineers, teachers, and doctors in government service. Through the chronicling of the author’s family history, the novel documents the values, aspirations, migrations, sacrifices, societal rise, material successes, tribulations, and, ultimately, the exodus of this community. This is a significant contribution.

The novel also brings to life the petite histoire (anecdotal history) of the old Punjab and renews our fading memories of the attitudes, politics, prejudices, orthodoxies, progressivism, prefeminism, and social changes of the early twentieth-century united Punjab of the British Raj era.

Nanda’s storytelling is rich with elements drawn from the original culture of undivided colonial Punjab. Traditional songs, romantic legends, classic dishes, and religious rituals of the original Punjab are evoked. We get captivating glimpses into the web of community relationships, the life of women, the Hindu-Sikh religious syncretism and Hindu-Sikh-Muslim coexistence of the period, and the folk wisdom of the land of the five rivers, which has almost eroded from the Punjabi psyche in both India and Pakistan with the development of the two contemporary but distinct and divergent Indian and Pakistani Punjabi identities.

The book is an eminently enjoyable read and will delight anybody interested in a good, juicy story apart from scholars of South Asian studies, Partition literature, and Indian literature in English.