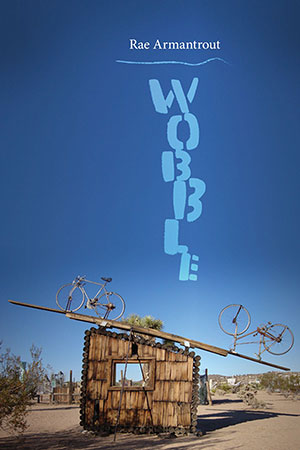 Pulitzer Prize–winning poet and California native Rae Armantrout’s provocative collection of poetry, Wobble, was a nominee for the 2018 National Book Awards and is further evidence that Armantrout continually proves herself to be a keen observer of not only the reality of life but also society’s shortcomings. To Armantrout, separating reality from narrative is essential to understanding, and Wobble isolates American life, revealing the desolate truth of the tumultuous world we in which we live. 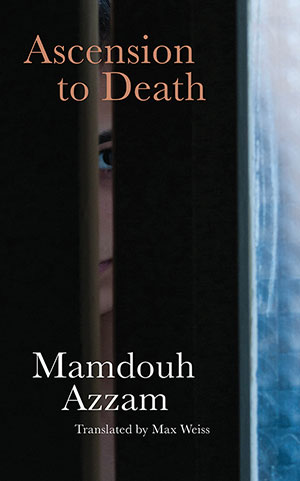 One of the most beloved novels in modern Syrian history, Mamdouh Azzam’s Ascension to Death is a powerfully raw, emotionally charged narrative of a young woman’s efforts to escape her life of oppression and torment in favor of freedom and love. The first of Azzam’s novels to be published in English, Ascension to Death explores the horrific crevasses in which the worst of human nature festers while simultaneously revealing the love that serves as the ultimate reprieve from darkness. 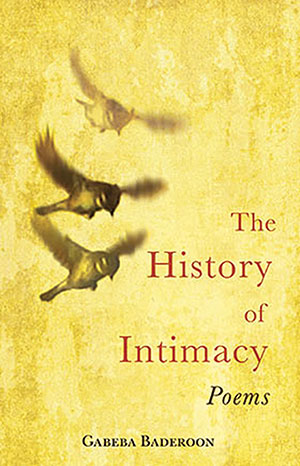 The History of Intimacy

South African poet Gabeba Baderoon’s fourth collection of verse impresses with its concision of language and clarity of ideas. With subjects ranging from the hidden tableaus of her personal history to the meaning and value of poetry, Baderoon’s verses invite the reader to join her on an exploration of history, culture, and the universal qualities of the subjective experience. 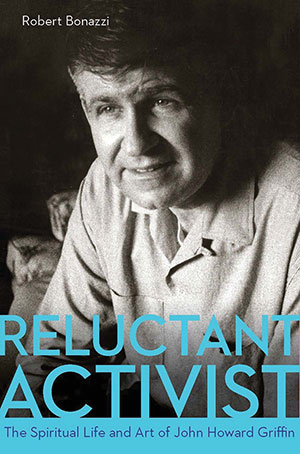 Authored by the executor of his estate, Robert Bonazzi, Reluctant Activist documents the life of John Howard Griffin. Griffin authored Black Like Me—an account of his travels through the Jim Crow South as a white man who had darkened his skin to appear black. In this work, Bonazzi chronicles Griffin’s global travels after 1961 as a human rights lecturer, drawing journals Griffin kept from 1950 through 1980 as well as multiple interviews with people close to him, including his widow, Elizabeth Griffin-Bonazzi. 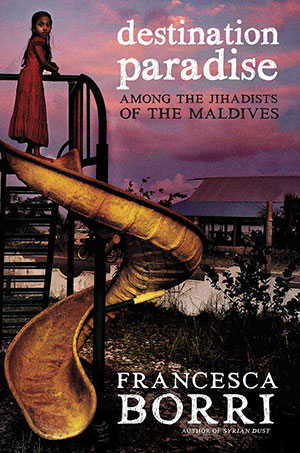 Destination Paradise: Among the Jihadists of the Maldives

Italian journalist Francesca Borri does a deep-dive into the Maldives, a nation known to many as a vacation destination for the superwealthy, but which also supplied ISIS with more foreign fighters per capita than any other nation on Earth. In investigating the abysmal gap between the haves and have-nots that define social life on this remote island chain, Borri sends up a warning flare to other nations of the world where wealth inequality continues to widen. 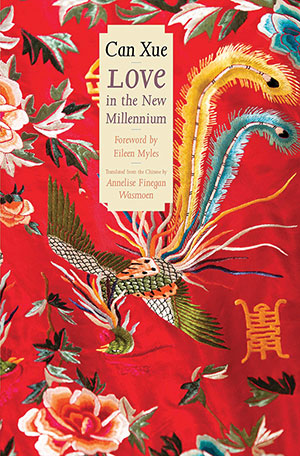 Love in the New Millennium

Love in the New Millennium is the English-language return of China’s most celebrated and perhaps most challenging novelist. Tackling age-old themes of love’s many iterations, Can Xue continues to upend comfortable notions of structure, narrative, plot, and character while crafting stories that linger in the mind long after the last page has been turned. 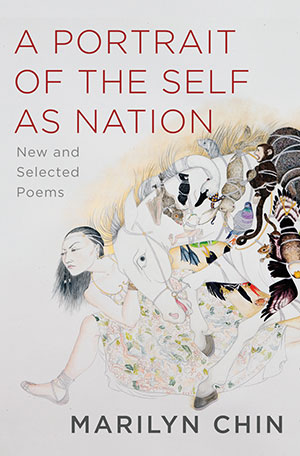 A Portrait of the Self as Nation: New and Selected Poems

Born in Hong Kong and a current chancellor of the Academy of American Poets in San Diego, Marilyn Chin has been at the forefront of contemporary poetry for decades. Existing in the culturally rich overlap between her Chinese heritage and experience with American assimilation, these new and selected poems boast a fearless energy and tenderness of spirit that are certain to leave an impression on both veteran devotees and new readers alike. 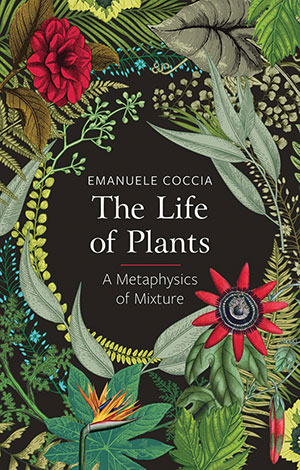 The Life of Plants: A Metaphysics of Mixture

Italian philosopher Emanuele Coccia takes the reader on a breath-filled journey into the physical and metaphysical realm of plants, seating them rightly as the transformers of energy into matter and the legitimate originators of the possibility of life out of the water. Coccia uses commonly understood ideas about respiration, photosynthesis, and fluidity as the building blocks for his compelling vision of atmosphere as an extension of the sea and the earth as an expression of the creative solar force. 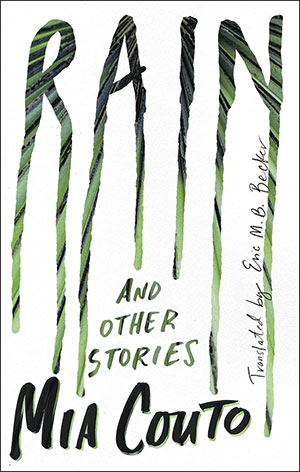 Rain and Other Stories

Winner of the Camões Prize in 2013 and the Neustadt International Prize for Literature in 2014, world-renowned Mozambican author Mia Couto strings together a collection of stories playing upon the uncertain future of war-torn Mozambique. With a focus on the rebirth of his country, Couto writes from the perspectives of various characters and frames the stories through the lens of magical realism. 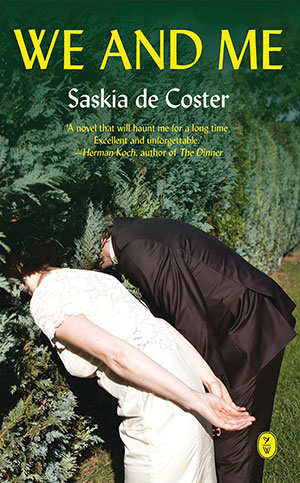 Having written and translated multiple novels, Argentine author Mariana Dimópulos’s splintered novella is about murders that haunt a girl in Patagonia. Dimópulos constructs time as fluid, making the narrative structure of the book fragmented; however, while her voice is vivid, at times there is an emotional disconnect between the reader and the characters.

Hans Magnus Enzensberger, considered by many to be one of Germany’s most important living poets, offers a series of provocative essays tied to society, religion, economics, and politics. Utilizing the abnormality of his world perspective as a poet, Enzensberger captures all that is curious and captivating in our contemporary world while at the same time searching for answers and unlocking ultimate truths. 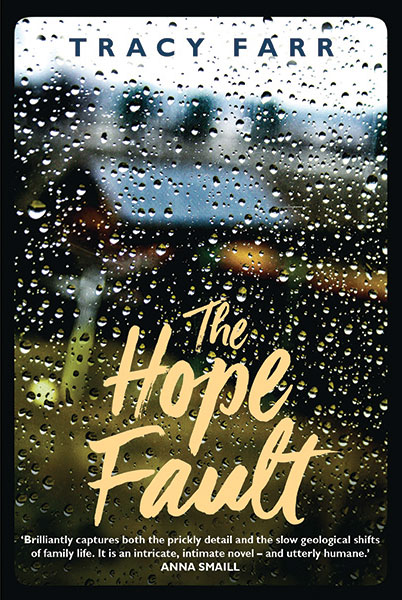 Tracy Farr’s second novel maps the complex social fabric of our age as an extended family descends on a getaway home one last time to prepare it for sale. As memorabilia are stowed away, tensions rise to the surface and secrets are exposed. Farr’s examination of amplectant bonds as equally capable of holding families together as they are of tearing them apart feels as real as fiction gets. 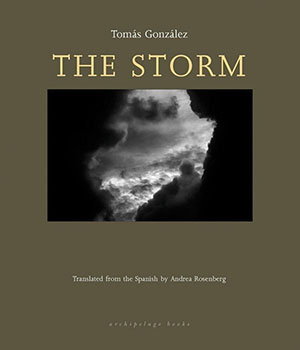 Translated from Spanish, Tomás González’s novel The Storm details one family’s grievances and twin brothers’ disdain for their arrogant father. Set in the Caribbean, González’s prose escalates in urgency as the family begins to spiral out of control, mirrored by the severe storm the family suddenly finds themselves in the middle of on a fishing trip. 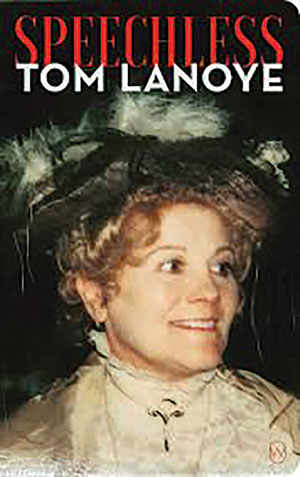 Flemish author Tom Lanoye’s tragicomic novel is imbued from the start with heartfelt humor and unflinching emotional honesty. A hybrid work of autobiography, testimonial, and fiction, Speechless allows Lanoye’s exquisite sensitivity to shine, capitalizing on his dexterous poetic instincts to colorfully depict the struggle of overcoming personal tragedy and reconciling oneself to the exploration and acceptance of sexuality. 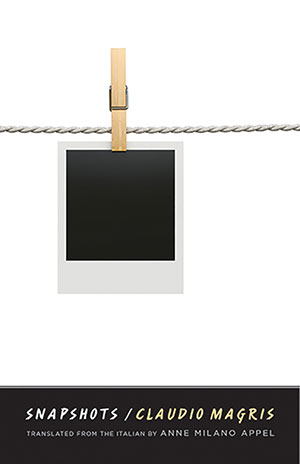 A collection of brief political, societal, and cultural reflections by internationally acclaimed author Claudio Magris, this gathering spans from 1999 to 2013 and offers witty analysis and humorous interpretations of a full spectrum of subjects. Magris’s unique perspective blends the personal and the universal into a rich spectrum of intensely human experiences. 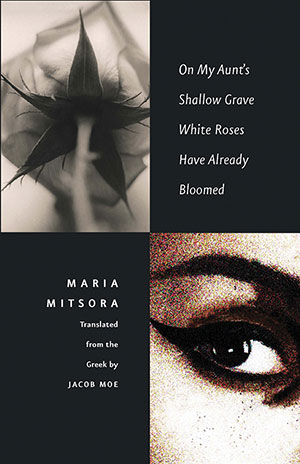 On My Aunt’s Shallow Grave White Roses Have Already Bloomed

Sixteen of Maria Mitsora’s short stories have been translated from Greek to challenge our previously held beliefs about the human psyche while exploring several variations of surrealist worlds obsessed with the darkness lurking in everyday interactions. Mitsora’s writing demands readers’ full attention, requiring that they immerse themselves fully in the passionately created, twisted worlds of her imagination. 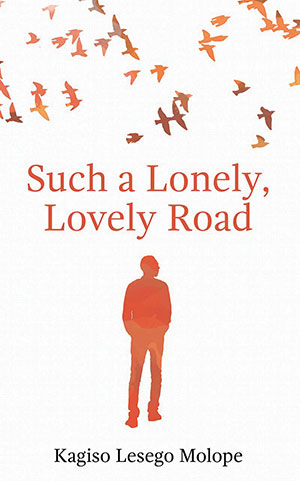 Such a Lonely, Lovely Road

Winner of the Percy Fitzpatrick Prize for Youth Literature, South African author Kagiso Lesego Molope delivers a powerful and inspirational story of longing and pursuing love despite social stigmas. Set in post-apartheid South Africa, the novel explores the sexual awakenings of two young men from the same township who will not be kept apart. 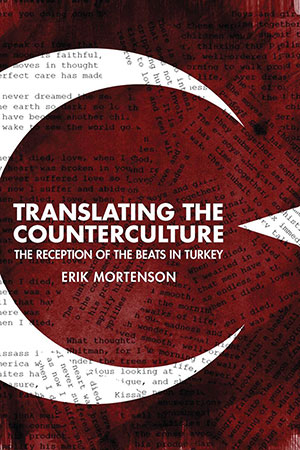 Translating the Counterculture: The Reception of the Beats in Turkey

Translator Erik Mortenson uses his firsthand experiences as a scholar in Turkey to frame this fascinating examination of how writers associated with the Beat culture in the West, including Allen Ginsberg, Jack Kerouac, and Charles Bukowski were received and translated into Turkish literary culture. Mortenson’s careful reading serves as a conceptual launching pad for considering how translation changes meaning. 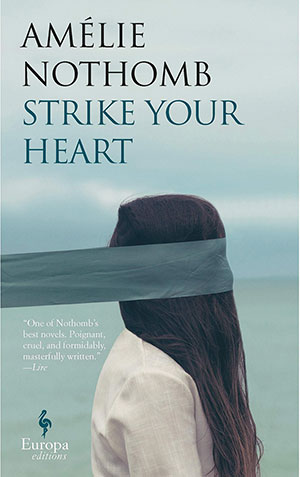 Strike Your Heart finds beloved Franco-Belgian writer Amélie Nothomb exploring the disastrous consequences of unrequited love between a daughter and her mother. When Diane escapes her alienating childhood to become a brilliant cardiologist, her need for female acceptance places her into the orbit of an academic with dark ambitions of her own. 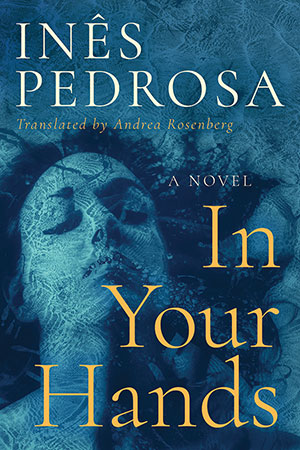 Portuguese playwright, journalist, and author Inês Pedrosa follows the lives of three generations of women in her introduction to English-language readers. Immensely rewarding and lyrically philosophical, In Your Hands won Portugal’s top literary prize upon its 1997 release; more than two decades later, the transcendent prose and timeless themes of love and tolerance are as resonant as ever. 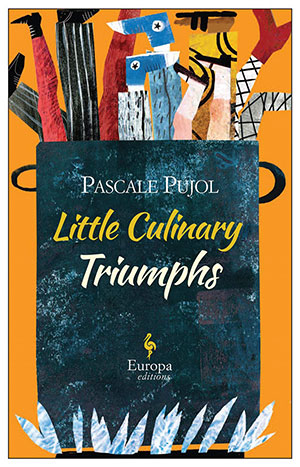 Pascale Pujol’s debut novel, Little Culinary Triumphs, is an entertaining read that follows Sandrine as she tries to realize her dream of opening a restaurant in Paris’s eclectic Montmartre neighborhood. Sandrine enlists the help of some of the neighborhood’s most colorful characters in an attempt to realize her dream while dealing with the discovery of a shady newspaper operation next door. Through her rhythmic prose and witty, biting humor, Pujol takes readers on an exhilarating narrative ride. 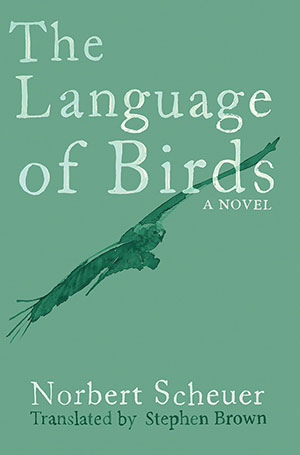 The Language of Birds

Norbert Scheuer’s The Language of Birds follows protagonist Paul Arimond, an army paramedic, as he navigates war-torn Afghanistan in 2003. Paul treads the same ground as his ancestor, Ambrosius Arimond, an ornithologist who traveled to Afghanistan in the late eighteenth century. The narrative follows Paul’s diary entries detailing the birds he encounters, illustrations of these creatures, as well as letters written by Ambrosius. This format, combined with Scheuer’s poetic prose, allows readers intimate access into Paul’s mind, resulting in a poignant look at personal tragedy and the atrocities of war. 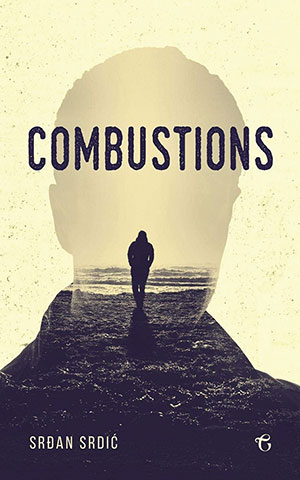 Combustions, translated from its original Serbian, is a collection of short stories penned by author Srđan Srdić, who has won numerous literary awards and has had his work translated across eight languages. Srdić’s prose is authentic and straightforward, weaving intertextual references into his emotionally detached yet detailed depictions of contemporary life. 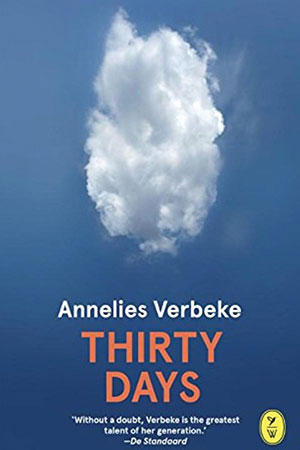 In Thirty Days, Belgian novelist Annelies Verbeke offers readers an inventive glimpse into the realities of the human condition through the eyes of Alphonse, a Senegalese immigrant. Featuring poetic prose, strong sensory detail, vivid imagery, and witty humor, Thirty Days is a compelling narrative dealing with such contemporary themes as immigration, refugees, and racism. 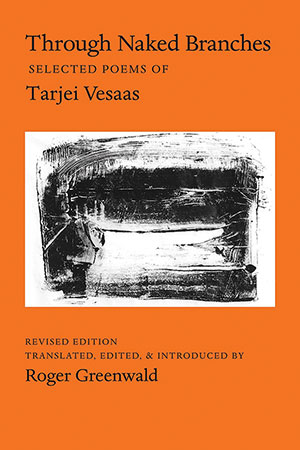 Widely known in his home country of Norway and the rest of Scandinavia, Tarjei Vesaas (1897–1970) was an accomplished novelist, poet, and playwright. Through Naked Branches is a beautifully composed collection of poems that elicits familiar feelings through the depiction of unfamiliar landscapes and cultures, making this work engaging to multiple audiences. Vesaas’s verse uses personification and other abstractions to aid in the understanding of the relationship between humans and nature in both rural and urban settings. 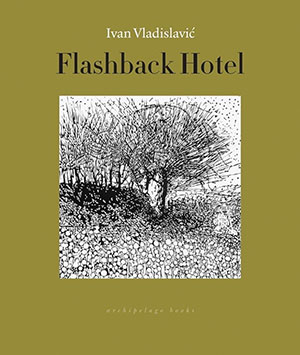 South African writer Ivan Vladislavić offers this collection of dreamlike stories that highlights his surrealist writing style and imaginative voice. Flashback Hotel blurs the lines between dream world and reality but does so while relentlessly searching for tangible meaning and teachings within the absurd. 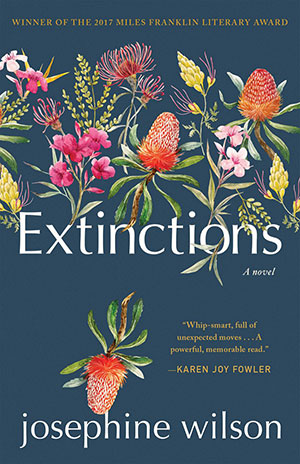 Winner of Australia’s Miles Franklin Literary Award in 2017, Josephine Wilson’s Extinctions intelligently defies expectations and unabashedly asserts itself as a masterful work of novelistic literature. Set distinctly in Australia, Wilson’s unique and intricately established characters come to life on the page, and their imperfections and traumas are portrayed naturally and honestly through her firmly grounded yet imaginative voice.