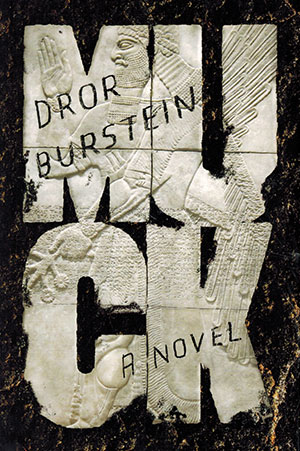 Dror Burstein is fascinated by prophesies of annihilation. His previous novel to be translated into English, Netanya (2010), was a meandering meditation combining a middle-class childhood memoir with contemplations of our planet’s place within the universe’s expanses. Family history merged with geological time, and the constant shift between scales and dimensions cast both into unfamiliar perspectives, simultaneously intimate and foreign. Drawing from a range of popular titles on environmental science, the novel is steeped with the prospect of looming environmental crisis and the end of human life on earth. Yet whether it is because of its longue durée perspective, which makes human life on earth appear like a minuscule happenstance, or due to Burstein’s reworking of Zen Buddhism’s impersonal philosophy into his prose, Netanya makes extinction look holistic, preordained, almost comforting.

Muck offers none of this detached, contemplative vision. Like Netanya, this novel is concerned with true prophesies of disaster. Yet here it is not humanity that is coming to an end but rather the city of Jerusalem, and its destruction is bloody, cruel, and painfully close, grating at the reader’s sensibilities. Muck is written with the urgency and wrath of biblical prophecy: it is a rewrite of the Book of Jeremiah, oddly transported to a Jerusalem that is simultaneously the city during the rule of King Jehoiakim (sixth century bce), the contemporary metropolis, and a dystopian grotesque version of both. Fake prophets ride the newly constructed light rail, Ba’al worshippers pass children through fire in the Sultan’s Pool, and the masses are kept entertained by the spectacle of the world’s largest bowl of hummus (one of many kinds of muck, real and metaphorical, overtaking the city), prepared in the upturned dome of the Planetarium. Burstein adopts the genre of biblical prophecy to condemn a society on a steady course of self-destruction. Rampant government corruption, nihilist celebrations of military power, and culture reduced to mass spectacle: these markers of our time appear in the book in grotesque yet immediately recognizable forms (though, strangely, the most dystopic element of contemporary Israel, the ongoing military occupation, is all but absent from the book).

In Burstein’s rendering, the Book of Jeremiah is the story of two aspiring poets who can no longer write poetry. The first, Jeremiah, is bestowed with the gift of prophecy, which brings him nothing but pain and a ruined reputation. The second, Mattaniah, who had tried to escape his royal destiny by leaving the palace, covering his body with cuneiform tattoos and writing Assyrian-style poetry, is nevertheless crowned king of Judea by the invading Babylonians. The two men, acquainted through Jerusalem’s gossipy poetry circles, continue to encounter each other in their new lives: Jeremiah prophesying the city’s destruction, Mattaniah trying to escape the inevitable catastrophe, but standing no chance against the Babylonians with their chariots and helicopters.

Characters and plots, however, are not Burstein’s strong point, nor his primary site of interest. The narrative meanders: we get attached to a character, then lose him and move on to another. It is not clear whose story we are following and which, if any, of the characters deserve our sympathy. Eventually, they all remain opaque, vessels for Burstein’s unflagging inventiveness and baroque language, which seamlessly shifts between contemporary colloquial idioms and biblical citations, a richness of idiom that is preserved in Gabriel Levin’s translation. Soon the reader realizes that the muck of the title also refers to the novel’s dense language, like a great, muddy deluge, swallowing up and sweeping under anything that happens on its path: garden furniture, fishbowls, talking dogs, broken jugs, pagan deities, or sadistic literary critics.

And yet it is among these random, amassed objects that the most touching and empathetic moments of the book emerge. The fishbowl, for example, contained two fish that were released by the five-year-old Jeremiah and his father one early dawn in the pond at the university’s botanical gardens. They then gave the bowl to the Ammonite security guard, who filled it with earth to make an ant farm for his son, and he in turn nurtured generations of ants inside it, even after his father’s death, even when he, too, grew old. Such are Burstein’s prophesies of hope, to hold on to as we tumult toward ruin.