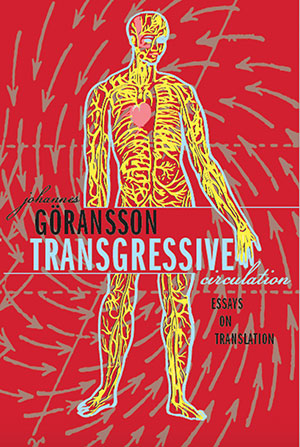 If you’ve noticed that translated books are enjoying an uptick in popularity, you are not alone. Indeed, the griping about a widespread disregard for the artform has given way to translations being lauded as a panacea for the dark times we’re living in. Everyone is on board, it seems, from magazine editors to publishers, whose lists now include translation-focused series. While I remain skeptical, seeing the latest cheering of translations and translators as a mere cyclical trend that’s more self-congratulatory than systemic—not unlike the cherry-picking of a few homegrown minority authors while the rest get shut out—the extra attention is a nice change. If only we could shift the accompanying conversation from the total number of translated books published in a given year, which strikes me as superfluous, to the question of their diminutive readership or the fact that many translators are no less self-serving than original authors . . .

In the meantime, we get to enjoy Johannes Göransson’s treatise, which rehashes some familiar arguments for and against translation—those of Venuti and of Steiner, for instance—but also, and more importantly, argues for translations to be recognized for their contributions to the shaping of all writing and the literary marketplace as a whole. He locates the mistrust of translated poetry in the mistrust of all things foreign and their alleged “strangeness” disrupting “bourgeois privacy, domesticity.” Furthermore, he criticizes—rightly so—that staple of creative writing pedagogy, “write what you know,” for equating good writing with one’s voice—i.e., something that is “natural, it comes from within, it is not artifice and it is not foreign.” Consequently, embracing translations upsets the writer-reader communication, which is endowed with authenticity, leading to a breakdown in “the economy of taste” due to the proliferation of questionable works/versions and voices. And that’s a good thing.

Göransson’s main contribution to the debate is to remind us that “translations deform” the target culture. “This violence,” he argues, “generated by the transgression of translation’s circulation, is not something we should attempt to protect poetry from.” Why? Because destabilizing hierarchies and opening oneself up to foreign voices “can be used against the regimes of control and exclusion.” True enough. But does reading foreign poets actually expand the poet’s thematic and formal toolkit?

While Göransson uses the example of some American poets having been denigrated for being “too influenced” by surrealists, it’s hard to believe that in this day and age a poet would be criticized for looking abroad for models, though apparently it happens. Göransson concludes his treatise by stressing that the American poetry scene is not homogeneous—and that we shouldn’t aim to master it. Championing “a more volatile US poetry,” he doesn’t, appropriately so, define it for us.