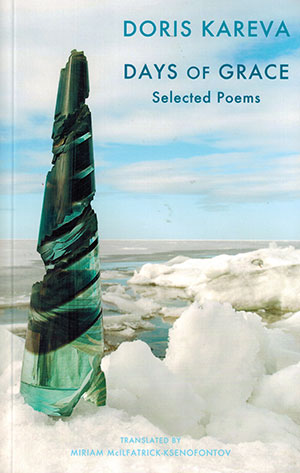 Days of Grace is an ascension, lifting the reader through three sections through silence into clouds and finally heavenly light. From the translator’s foreward to the author’s single, concluding prose piece, I was riveted by this collection that exhibits grace in its truest form as well as an awe-inspiring sense of the divine paired with monuments to human frailty. These poems are short and small, mere whispers in the vastness of space, yet they seem to echo against the walls of medieval churches and clouds simultaneously. Because most lack titles, the author having simply broken them into sections, they read easily as a continuous narrative, a fitting homage to her father, Estonian composer Hillar Kareva. This particular collection spans forty years of Kareva’s poetic work, and after fifteen collections of poetry as well as one each of essays and prose, her linguistic skills are honed to a point so sharp and fine that it cuts glass with every word you read.

The most fascinating element of Kareva’s poetry to me is that it seems haunted by a sense of religion and spirituality with the dark and intense tone of Europe’s Middle Ages. The angels in her poetry come always bearing swords, and an intense power can be felt even in the ether between pages. As Kareva grapples with dark and light, heaven and earth, life and death, speaking and silence, the reader cannot help but feel engrossed by her pert yet poignant word choice, and the attention to sonic detail by translator Miriam McIlfatrick-Ksenofontov is not to be understated. When Kareva writes about writing, as she does in “If you speak only once . . .” and “When I write . . . ,” it is clear that she is a master of her craft, self-aware and in full possession of her artistic faculties. Many of these poems will stay with me long after I put this book down, and are more than worthy of being returned to, yet one stanza in particular haunts me: “The art lies in deciding / where on earth art begins. / The counter of waves may lose / sight of the ocean.” Kareva loses neither waves nor ocean in her poetry, instead somehow encapsulating unfathomable moments, like a sunbeam kept in a terrarium, for the understanding and joy of her reader.