Swallows and Floating Horses: An Anthology of Frisian Literature 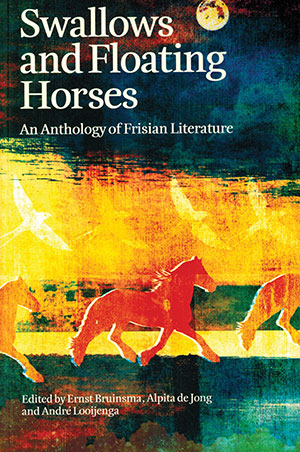 In 2005 the publisher Francis Boutle embarked on an ambitious series of bilingual anthologies of the Lesser Used Languages of Europe. Recently, the ninth volume appeared, Swallows and Floating Horses, focusing on Frisian literature. This publication forms a perfect match with As Long as the Tree Blooms (WLT, Jan. 2019). Where the latter is a concise, colorful, and illustrated introductory history of Frisian literature, the Boutle anthology offers a more detailed approach that includes excerpts of texts with a translation in English, accompanied by essential information for sufficient context. An eight-page introduction provides the indispensable historical framework. The book contains a selection of around 140 entries in a compact layout.

Though Frisian and English were originally closely related, over the course of centuries both languages developed in a completely opposite direction. The anthology tells the story of the Frisian language, its speakers, and its literature, illustrated by Frisian sources but also by outside sources in languages like Dutch and Latin. The first entry starts with the arrival of English missionaries and offers an excerpt of the biography of Liudger, the first missionary bishop of ethnic Frisian origin. He miraculously cured the blind Frisian singer Bernlef (ca. 800), “who was dearly loved by his neighbours . . . for his skill in reciting their ancestors’ deeds and their kings’ feats of arms to the music of the harp.” The last entry presents a poem by Elmar Kuiper (b. 1969) in which the poet cries out about the deadened agro-industrial modern Frisian landscape: “when the lapwing / on my land shrieks eek-eek at the sight / of her ruined nest, where my godwit weeps / like a blind poet, sick with yearning.”

The three editors, each in one chapter, deal with the vast field of written Frisian, stretching from mythical history to today’s poetry of engagement: Old and Middle Frisian, the eighteenth and nineteenth centuries, and the twentieth century to the present day. A short fourth chapter is dedicated to North and East Frisian, where no substantial literature arose. Each editor follows a different approach. The first chapter focuses on the existing canon, whereas the second highlights the two-sided status of Frisian as a farmer’s vernacular that even so had the aura of being old and respectable in the eyes of foreign learned language lovers. As the chapter on the twentieth century demonstrates, the editors stress they have refrained from presenting a canon of modern Frisian poetry and prose. Instead, they show examples from literature that illustrate the modernization of Frisian society since 1900.

This approach circumvents the inevitable dispute about which texts belong to the canon. Examples include the breaking of sexual taboos in the 1960s, the ecological crisis, and the appearance of racist sentiments due to immigration. However, there is no mention of feminism, LGBT emancipation, or even the internet, which surely have put their imprint on Frisian society and literature, too. These flaws, nevertheless, are only small specks on the grand panorama of Frisian written language offered to us in Swallows and Floating Horses, with due credits also to the team of five translators and their three Frisian counterparts.