The Witch Elm by Tana French 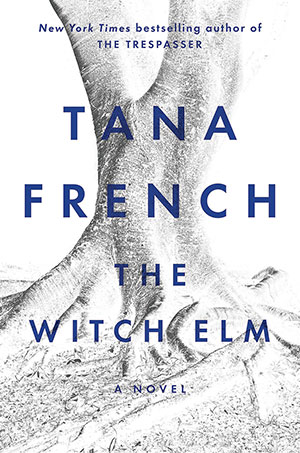 “Too long for a detective novel,” thinks the genre fan, hefting The Witch Elm. But it’s Tana French, so expectations are high.

The protagonist, Toby, tells us right off that he has always been lucky. After a night of drinking, he charges into the living room, candlestick in hand, to confront two burglars, without even ringing the police. He is beaten senseless. Thus concussed, limping and halting in thought and speech, he continues front and center, all fears and emotional swings, because he is telling the story—his story.

For over 150 pages, the reader rehabs with Toby as he handles anger, memory lapses, and alienation from everyone except his extraordinary girlfriend. Family feeling prompts a move to Ivy House to care for a favorite uncle dying of brain cancer. Toby begins to reconnect with people. It is with a sense of relief when a skeleton is found in the garden behind his uncle’s home. Even better, the bones are those of a schoolmate who was supposed to have committed suicide elsewhere ten years ago. Toby becomes a suspect, decides to probe, and the game is afoot. The rest of the novel is the standard length for a mystery.

Late in the story, Toby makes a statement that could apply to readers’ experiences with most Tana French novels: “The world I had been blithely bouncing through had been so utterly unrelated to this one running along its dark subterranean track, I couldn’t make the two of them click together in my mind.”

The statement testifies to the imaginative power of French’s novels, elevating them above the common run of genre fiction. The process of investigation is often effaced by the unveiling of this other world, a world in which people who seem ordinary plan, conspire, and commit crimes, with little resultant guilt. One understands and perhaps sympathizes with their choices. Sometimes, as in this novel, the investigator is asked to imagine a similar circumstance. Not surprisingly, the reader can think of such a circumstance and what he or she would have liked to do.

Tana French writes psychological fiction that uses crime to open doors to the subterranean. As such and especially in this first-person narrative, action is subsumed to the discovery of character. Uncovering perpetrators is subsumed to the revelation of dark amoral worlds. Apprehension, if it occurs, is secondary.

That’s why her characters remain after the solution, the “how” of the crimes, fades from memory.