The Females by Wolfgang Hilbig 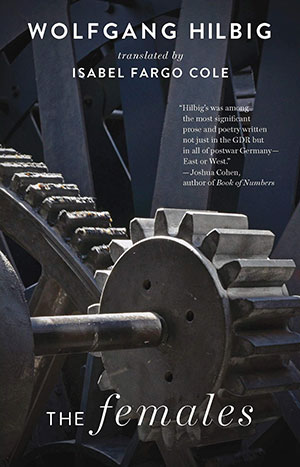 One of the many reasons Wolfgang Hilbig left the German Democratic Republic might have been that, as his narrator suddenly realizes, all at once there were no longer any “females” in that totalitarian state. It seemed that the state had banished the bottom halves of female persons to the West, where they were being stuffed with money, while it had kept the top halves in the East, where these developed muscular arms that could support the Aufbau, the “building up” of the new state.

In building this new society, after all, there was no room for “wallowing in bourgeois distractions” or indulging in “hobbies of the intellectuals” such as sex. “Sex” was what they had in the reactionary West. Worse, “sex” was, in fact, an American word and hence totally taboo in a country of “true love.” The past was equally taboo. The GDR had no compunction repurposing factories that produced munitions for the Nazis using inmates from the adjacent concentration camp. Now they produced radios. Just as it had exiled sex, the GDR palmed off its own historical responsibility on the “reactionary West.”

That Nazi past haunts the narrator in nightmare visitations from Ilse Koch, the “Beast of Buchenwald,” though in his waking hours he merely has to face the weighty woman official at the Workplace Steering Committee, who eyes him with something “between mockery and outrage” when he explains that he had used his free time between jobs to try his hand at writing. Who does he think he is? Giving himself “intellectual airs!” He needs to work in the real world. Room for art or imagination seems to have been banished as well.

Resigning himself to that real world, he works as a stoker in the boiler house of a large laundry staffed by the inmates of the huge prison next door. One day he hears voices that compel him to climb to the roof of the boiler house. And there, in the prison yard, he sees the missing females. When he shouts in joy, he believes they send him a signal: Just wait!

We know that Hilbig had given up waiting, having left in 1985, but we also know the “females” would prove right: those walls did come down. How toxic life had been within them Hilbig has depicted almost too palpably, and Isabel Fargo Cole has once again faithfully rendered his work into perfect English.