The Angel of History by Rabih Alameddine 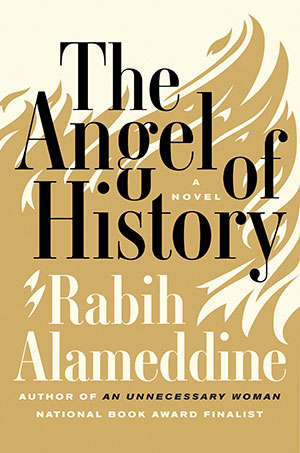 Jacob has issues. He was born a bastard in Beirut, the son of a bourgeois Lebanese teenager and a Yemeni housekeeper. He spends much of his youth in a brothel in Cairo, graduating from there to a Catholic boarding school where he loses his virginity to a nun. When he emigrates to the United States, his status as a dark-skinned Arab doesn’t make assimilation any easier. And as a young gay man living in San Francisco at the very moment when the AIDS epidemic descends upon that city, he may well feel that he has not been dealt a fair hand in the existential game he is called upon to play.

As if he were not marginal enough already, Jacob is also a poet, “a poet with the soul of a priest” more precisely; but in the present time of this novel (early twenty-first century), he finds that he can no longer write poetry effectively. He turns to fiction instead, and some of his stories appear here, interpolated among other narratives. They read much like fables. One puts onstage a boy who lives in a basement; another is told from the point of view of a military drone stranded in the Pakistani tribal regions; still another is about an upscale gay couple in New York that keeps a pet Arab in a cage.

If Jacob has been able to keep his sanity while being generally reviled and while his closest friends died, one after the other, it was at least in part thanks to the Fourteen Holy Helpers, those “auxiliary saints” who tend to be forgotten, except in times of plague. Satan himself interviews them in this novel, polling them about their attitude toward Jacob and how he chooses to live. Other parts of the novel are either abstracted from Jacob’s journals where he speaks to his lover, dead for almost twenty years; or they focus on a psychiatric clinic where Jacob has gone, seeking some relief from the voices in his head.

The reader may come to realize that Jacob is far saner than he himself suspects, however, for he is a man who has endured against staggering odds. He may hear voices, but he turns those voices to useful writerly ends. Rabih Alameddine sketches an exceptional individual who gradually reveals himself as exemplary in the way that he struggles with the desire to forget and the imperative of remembering. There are moments that recall early Grass or Rushdie as Jacob vexes his personal history against collective history in order to see what sparks may fly.

There are moments, too, of sleek, quicksilver prose: “I was always alone, Doc, solitary whether I wished to be or not, ever since I could remember I wished to be lost in another, thought that somehow I could disappear into that heart of yours, take walks within your veins, wander through the bones of you.” There are moments of bracing, tonic irreverence, as when one of the Helpers describes the nuns’ efforts to Christianize Jacob: “Our Jacob arrived a Muslim, allegedly; he needed a megadosage, a supersized Mary with fries.”

Just like Jacob himself, Alameddine’s novel resists easy taxonomies. Its mobility and nimbleness make it difficult to pin down; its subversive strategy turns irony back upon irony. Most impressively, it paints a portrait of a man beset on all sides by powers well beyond his ken, who nonetheless absolutely refuses to capitulate. He is a Bartleby with a conscience, a Gregor Samsa with a purpose, a Plume with real guts.