About My Mother by Tahar Ben Jelloun 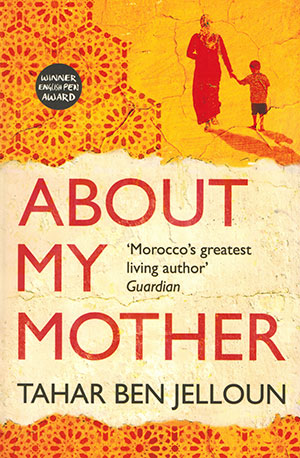 There is a sort of prophetic air that accompanies much of the titular figure’s speech in Tahar Ben Jelloun’s About My Mother. Though autobiographical in some moments, Jelloun appears aware that his personal reflection is peripheral, instead focusing much of his efforts on instilling life in his fading parent, Lalla Fatma. Fortunately, Jelloun captures his mother’s essence splendidly, conveying quirks and anecdotes naturally. With About My Mother, Jelloun illustrates a life remarkably, not only in a celebratory fashion but also in a way that recognizes and reconciles the reality of loss.

Set in his childhood home, Jelloun’s detail about the location from which he finds himself several decades removed at the novel’s onset bolsters the two most visible characters outside himself, his mother and her personal assistant, Keltum. There’s a feeling the place conveys, with the living room’s broken chandelier and a myriad of colorful medications, which can almost be smelled through the author’s vivid prose. This attention to detail often lends itself to the weariness of Jelloun’s visit as perception melts into itself and time slows to a crawl, made evident as “images fall from the [television] screen and mingle with the dust on the carpet.”

Chapters of quiet examination are interrupted by episodes of his mother’s delusional fervor, interwoven within the narrative to the rhythm of a persistent soul. One instance finds Jelloun’s mother preparing for the arrival of her three husbands, each of whom are long deceased. A similar excerpt finds Lalla Fatma claiming she was visited by her third spouse and the author’s father, whom, she recalls, appears exceptionally sharp. After her son reminds her of his father’s fate, Lalla comically resolves that “death suits him.” Jelloun conjures a realistic and engaging image of Alzheimer’s disease, but it is the revelations his mother voices that allow the novel to resonate.

Jelloun recognizes that despite his mother’s failing faculties, a life of adversity and passion strives to persevere. Perhaps the fiery and sporadic nature of his mother’s condition is what makes this work most harrowing, as Lalla Fatma’s moments of liveliness bring forth a momentary hope within the shadow of inevitability. Due to this, the work can at times seem emotionally taxing. However, this is yet another necessary facet of Jelloun’s realism. Despite its morbid subject matter, About My Mother pulses with life, invigorating the reader with every sentence.