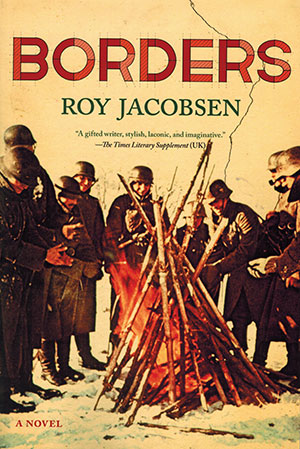 What are borders? “Not something to be taken lightly,” declares Norwegian author Roy Jacobsen in his latest English translation.

Over thirty-four years, this renowned author has written four short-story collections, over a dozen novels, a biography, and a children’s book, plus coauthored a movie script. His awards include the Norwegian Critics Prize for Literature, Norwegian Booksellers’ Prize, and shortlisting for the International IMPAC Dublin Literary Award.

Creatively blending history and imagination in his novel Borders, Jacobsen marches readers deep into the Ardennes, dense forests where a real river named Our slashes nations between two villages: Dasburg in Germany and Rodershausen in Luxembourg. One main character is a boy named Robert, product of a month shared by his mother, a Belgian nurse, and his father, an American GI pianist who vanished before Robert’s birth. Thus, Robert reveres his “blind” godfather, Markus, who actually sees a lot. As a German radio operator, though, he couldn’t save his own son with the Sixth Army in Stalingrad.

As a noun (naming word), border implies splitting apart. As a verb (indicating action), it suggests adjoining. Borders separate people, languages, and cultures, but “they are also there to be crossed at the appropriate time.” Jacobsen builds both literal and emotional bridges, offering his characters passage across obstacles to connect. Yet agreement on a border’s exact location must occur first—and the structure won’t necessarily qualify as a “bridge” in everyone’s eyes. Some may even be blind to it.

Ah, “memory can play tricks on anybody,” Jacobsen discerns. The past becomes a leitmotif: “history stopped for a moment, it was resting. . . .” Jacobsen underscores: “we have our own small choices to make within the weightier ones that history makes for us.” Each person plays a role—even Yadviga, an omnipresent toothless old Cossack woman.

The river’s name becomes allegory. On it flows, blissfully unaware of its role. Borders, blindness, bridges—Jacobsen nestles them all beside “the peaceful Our, which meandered through the dewy meadows with such heavenly calm, if only life on earth were like that.”

Borders is a sweeping masterpiece.