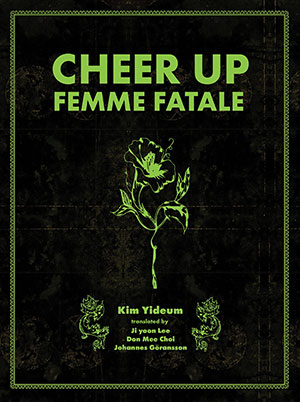 In her epilogue to Cheer Up, Femme Fatale, translator Ji Yoon Lee asserts that this book is “crawling with things that go missing.” Indeed, it is a book of emissions and excretions, ruptures and desecrations, torn personae ripping through their scenes in poems inhabited by dead lovers, fat rats, a plenitude of naked bodies, and costumed acts in swamps, temples, smoking offices, and Arcadian skeleton-filled hills. In “The Bathtubs,” Kim italicizes her point—“If you don’t describe the scene realistically, it ends up as pornography”—and so much in these fabular burlesques remains explicit but never titillating, a chorus of maddened rhapsodes dancing across the daemonic spectacle of Seoul’s hypercapitalism.

In the grandiloquently titled “The night before opening a Barbie repair shop in an abandoned mental hospital,” Kim concludes with “he kneels down and penetrates me. To prevent him from going crazy and tearing my expensive shoes and hat, I just lie there,” and this perhaps exemplifies a critique at the heart of the book: these excoriating cris de coeur seem to insistently reveal dramatispersonae surrounding themselves with coveted baubles while mutely accepting the concessions (bodily, psychic, affective) and enslavements accompanying the logic of commodity fetishism. In these dehumanized zones, Kim would remind us (as she does in “Seoul Performance”) that there is “no synopsis, no rehearsals, everything just happens.”

In this highly structured hierarchical culture (which some here call “hell Joseon”), rather than feast on the monoglottal discourses of corporations working to feverish overdrive, Kim advocates instead a radical disordering of sensibilities through her image-engorged pleas. “Distribution Center” opens with epigraphs from a news article reporting a union strike and a statistic on international adoptions of Korean babies and then asks: “What the hell did this used to be? What a piece of junk. / No need for a processing fee, because nobody will claim this package. / This flotsam, which used to be some sort of organism, is quite political.”

The qualified, elliptical stance is telling; here is a vaudevillian poetry stylizing the banality of consumption as a mania of excess that, as Ji Yoon Lee asserts, overlays “a foundation of violence, death, and trauma, the emotional charge of which is not [yet] relieved.” Kim Yideum’s texts can be read as allegories, tiny epics, and morality tales; this is a samizdat scrutinizing a country where everything—maybe anything—is for sale; acting as if “a clerk at a résumé service” and taking down a necessary dictation, Kim is compelled to record her “emptiness sutra[s]” that reveal, finally, an emergent posthuman condition.