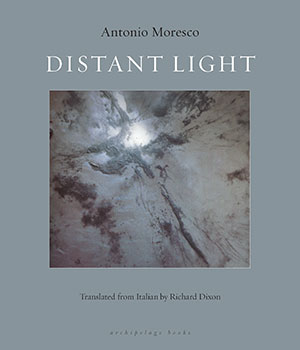 The unnamed narrator of Antonio Moresco’s Distant Light is uncommonly attuned to the natural world. Fleeing from his past for reasons that are never fully explained, he settles in an abandoned village and embarks on a monastic existence. He spends his days wandering through the woods, carrying on one-sided conversations with badgers, wasps, and toads. After dinner, he sits outside and watches “the first stars come out.” Gazing across a valley one evening, he sees a light emerge from a seemingly uninhabited hillside. Certain that he’s the only person within miles, he resolves to find its source.

Moresco’s fiction has won prizes in his native Italy and abroad. His most celebrated work is L’increato, a trilogy of long novels. In this ethereal novella, ably translated by Richard Dixon, Moresco demonstrates a talent for succinct scene-setting. It takes him just a few pages to sketch the contours of his main character’s circumscribed existence, and within this context, his humble quest comes to feel like an epic undertaking.

After a comic detour involving a farmer who believes the light is from a UFO that abducted his goats, the protagonist discovers a neglected path leading to a stone hovel. The building, Moresco writes, is “little more than a ruin that had perhaps once been an animal stall.” Inside is a young boy. Polite but somber, the child is dressed like a preteen from another era and has a vaguely spooky mien. He’s an orphan, he tells the narrator, and he lives alone. The light is his; he leaves it on all night because he’s scared of the dark. Over a series of subsequent visits, the two develop a rapport based on their shared sense of isolation. The narrator, we learn, may be recovering from a romantic mishap: he wonders if animals also “have that short, cruel dream that has been called love.” If this detail is telling, those that emerge about the child’s past are nothing short of astonishing.

At times, Distant Light reads like a straightforward fable, an elegant rumination on the mysteries of the soul. But there are a number of grave and surprising subplots in this story, each of which Moresco explores with great care. Brief but often quite moving, this enigmatic tale of solitude and companionship abounds with humanity.