The Hatred of Poetry by Ben Lerner 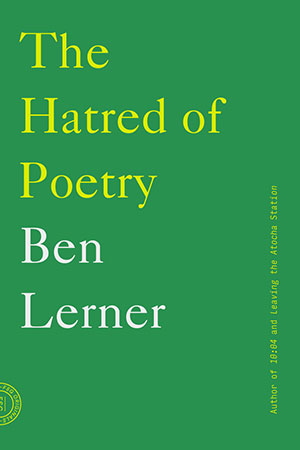 Celebrated novelist, poet, and critic Ben Lerner’s essay (an extended version of his 2015 London Review of Books article) uses “hatred” as an ironic rhetorical strategy to demonstrate what can be interpreted as tough love. But Lerner writes himself into Laocoönian knots with breezy generalizations, half-truths, false assumptions, and straw-man setups. Quoting the bold opening (“I, too, dislike it”) from Marianne Moore’s four-line “Poetry,” he offers a deconstruction that posits the impossibility of writing a perfect poem because language fails to be the equal of an ideal possibility. Following his mentor, the late Allen Grossman (a mystic poet and critic), he advances the view that poetry “arises from the desire to get beyond the finite and the historical . . . and to reach the transcendent or divine.” Because this is impossible, the poet is “a tragic figure,” and every poem is “always a record of failure.” According to this “bitter logic,” a poet can only compose poems “that, when read with perfect contempt, clear a place for the genuine Poem that never appears.”

My first objection is that the word “genuine” is not an aesthetic term; it is a term of forensic investigation or of valorization. His own notion clarifies nothing. Indeed, it raises more flags than a UN assembly. Remembering Plato’s denunciation of poets, he conducts a tour of Western poetry from Cædmon, Sir Philip Sidney, and John Keats to Walt Whitman, Emily Dickinson, Amiri Baraka, and Claudia Rankine (with other of his poetic touchstones en route) in order to make a case for Grossman’s idea of a “virtual poem”; that is, an abstract potential of the medium as opposed to the perennial letdown, an “actual poem.” This postmodernist cachet does not, indeed cannot demonstrate what that ideal would be for any poet. Lerner is trapped by his own tautologies.

When he gets down to analyzing major poets, Lerner is instructive and incisive, but his essay misquotes Wallace Stevens (writing “Poetry is a kind of money” instead of “Money is a kind of poetry”), spends an inordinate amount of space demolishing the execrable William Topaz McGonagall, defines the entire avant-garde as haters, rates Marinetti’s Manifesto of Futurism higher than the Italian’s own poems (without recognizing that the manifesto, by the terms of Lerner’s own utopian standard, is a failure), and offers some corny, contrived examples of his argument. His “hatred” is fundamentally a misnomer for radical disappointment or regret over a tough love gone wrong.