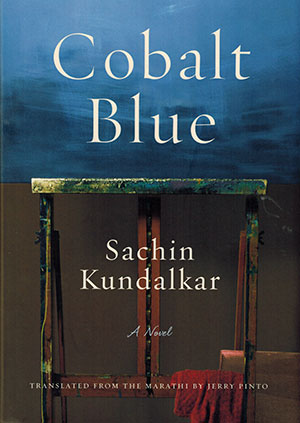 The novel, divided into two parts (“Tanay” and “Anuja”), depicts the profound impact this stranger has on the two characters after he disappears without explanation. Tanay’s narrative is an imaginary, emotionally intense dialogue between an “I” and a “you.” Anuja’s narrative consists of diary entries where she tries to reconstruct her life after her lover leaves her. What unites these two narratives, which often show us the same events from different perspectives, is the polyvalent use of blue.

Blue functions as a marker for the alluring difference of the other, for example when Tanay says: “You had a way of looking at things which seemed sharp, perceptive, cobalt blue.” The color signifies an incorporation of the other within the self when Tanay ruminates on relationships: “If nothing else,” he says, “you adopt some of the other person’s habits.” Almost as an afterthought, he reveals how his beloved is woven into his perception of self: “Yesterday, when a cobalt blue smudge of the wall ended up on my hand, I wiped it on my trousers without thinking.”

Blue operates as a cipher of loss like the blue paint drying on the floor in Tanay’s “museum of broken things” or the “stream of blue water” that Anuja witnesses flowing down from the room her lover resided in as her family tries to erase any sign of his presence. Blue also becomes the element through which Anuja rediscovers herself, as in the resonant closing image where she leaps into the “deep-blue water” of a swimming pool.

Through a lyric intensification of such polyvalent images, Cobalt Blue hauntingly portrays intertwined narratives of love, loss, mourning, and survival in the mundane minutiae of everyday existence.