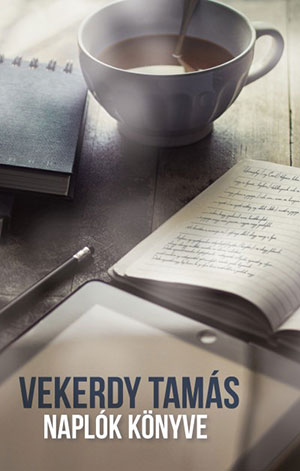 Tamás Vekerdy, one of Hungary’s top educationalists and founder of the Waldorf Schools in his native country, is also an impressive writer. His early literary work was reviewed already in Books Abroad (1976), and with the publication of Naplók könyve (Book of diaries), he once again demonstrates his strength as a writer of docufiction.

Both Vekerdy and his family are investigated and analyzed in this collection of fragmentary diaries. The first, “Böske naplója” (Lizzie’s diary), is the diary of a young Jewish woman in the 1920s who turns out to be the author’s maternal aunt. These are the notes of an intelligent and sensitive person, struggling with her status as a second-class citizen in contemporary Hungary. The next, very subjective diary dates from the period 1944–45. It is told from the point of view of a young boy with a Christian father and Jewish mother, frightened first by the terror unleashed by the Fascist Arrow Cross Party that followed Admiral Horthy’s unsuccessful attempt to end the war, then shocked by the behavior of Soviet soldiers in “liberated” Hungary, which included arbitrary mass arrests and the not-infrequent rape of young Hungarian women.

Interesting as these two earlier diaries are, I found the next two chapters even more relevant. “1956–68. Negyven év multán” (After forty years) gives a faithful account not so much of the facts but of the chaotic and elated atmosphere of the 1956 Hungarian revolution. In this, Vekerdy uses imagery known from documentary films, which he mixes with somewhat skeptical commentary. I have to quote an event that highlights a detail about the sequence of events that led to the revolution: I perfectly well remember meeting Vekerdy and his then-girlfriend Vera on October 22, when we agreed to organize a demonstration for the next day at various universities in Budapest in support of our beleaguered Polish friends. This meeting is erased from Vekerdy’s memory, though he admits that it could have taken place, at the same time maintaining: “The revolution just happened. It was not us who made it.”

He is right there looking at the overall picture but wrong in ignoring the importance of coordination between several students of ELTE (including myself), who later on had conflicting memories of their role in the drama of October 1956.

Another diary of special interest for the contemporary reader is “Egy liberális naplója” (Diary of a liberal), written between 1994 and 1998, at a time when it became clear that in independent, post-Communist Hungary only conservative and/or socialist/populist party programs could bring in votes. Vekerdy considers himself a liberal in the tradition of the great Hungarian liberals (Széchenyi, Deák, Eötvös) of the nineteenth century. He points out that, in the twentieth century, nearly all dictatorships arose from either Socialist or populist (National Socialist?) premises and that, indeed, most principles of liberalism are in agreement with Christianity. Let me quote a sentence from the conclusion of this diary: ”With antiliberalism the problem is . . . that it does not allow reality to be reality, denies it . . . so it is compelled to be hypocritical in its denunciation of other [ideologies].”

Toward the end of Vekerdy’s book, one finds two short pieces on education, the first of which is a sympathetic report from his visit to Boston in 2015 where he was invited by “Boskola,” a local Hungarian school, and the second (Dream about a school) describing the ideal school where the children are free to learn and play rather than just swallow chunks of information. Naplók könyve is organized on the same lines: it is both an entertaining and useful read from which we learn a lot about the author and his family as well as about the state of contemporary Hungarian society.