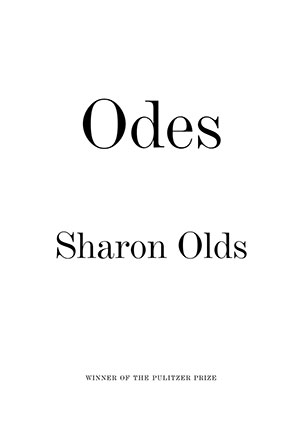 This latest book by Sharon Olds, Odes (a near perfect rhyme), contains sixty-four poems of praise. They are not written in the traditional English form of the ode but instead in Whitmanesque free verse, replete with bountiful anaphora and ecstatic address. Some of them are poignant homages for her sister, mother, friends, and past lovers, open-hearted remembrances filled with tenderness, gratitude, and, in the case of her mother, forgiveness.

Twenty or more of these poems, however, are in the vintage mode of Olds as provocateur, the 1960s-era author of “The Pope’s Penis” and other openly sexual and even iconoclastic tests of the limits of acceptable poetic content. Always the daughter of Whitman, she sings not so much of the body electric but of the body sexual (and sometimes even excretory). Olds has had many lurid imitators who miss her greater project. Yes, her poems present matter-of-celebratory-fact aspects of the body sexual, but they never merely focus on parts as parts. Instead, they are connected to the whole of human experience, personal, historical, and even mythological (Diana in “Ode to the Hymen”). Olds offers a radical self-cleansing of guilt and shame, both personal and societal, but also, by example, she reveals what is left out in communal discourse when we banish the sexual to the closet of suppression. She seems to offer a total integration of body and spirit. In “Ode to Whiskers,” we read: “Sometimes I regretted that I could not dally, but I / tried it once, when I was a fresh left / wife, to go with a man who was not into / love, it near killed me, my heart / is my body, the price of a kiss is your life.” Olds cannot be reduced to a sensualist, hedonist, or materialist, as some have tried to do.

She uses synecdoche, direct address, and figurative appositives to create clusters of association on multiple levels of human experience. In other words, many of these poems speak directly to the body part as if it were a whole person and then continue to name and rename it metaphorically. For example, in “Ode to the Clitoris,” she begins: “Little eagerness; / flower-girl basket of soft thorn / and petal, near the entry of the satin / column of the inner aisle; / scout in the wilderness; wild ear / which perks up; tender dowser, which points.” Here, the clitoris is immediately transformed into the flower-girl basket brought to the wedding and the vagina to the inner isle where the union takes place. Then the clitoris becomes a messenger in a wilderness of sexual attraction, alerting and alerted, and then it becomes that which points to the waters of life—all in six lines.

Of course, such full identification of heart and spirit with body poses implicit questions and considerations. What happens, as in Tolstoy’s The Death of Ivan Il-yich, when the same flesh of which we were proud and satisfied when we were young becomes the source of the greatest possible pain later in life? Do we sing it then? Does the spirit perish with the body, not as rider in the vehicle but as mere epiphenomenon? Olds’s poetry provokes these deliberations and others, at least in the reader; in her poems, the jury is still out.