The Heart of the Leopard Children by Wilfried N’Sondé 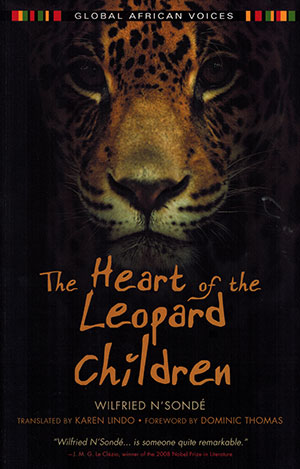 The unnamed narrator of Wilfried N’Sondé’s novella The Heart of the Leopard Children describes his wretched and brutal experience in a French prison where he is being held for committing a violent crime. In between beatings, he remembers his happier, early years in France, to which he emigrated as a young boy from the Congo.

N’Sondé has burst onto the literary scene with this brief yet powerful tale, which is his first work in English translation. As a francophone African writer, N’Sondé presents a true-to-life and sobering account of the bleak experience of immigrants living in France. His narrator grows up in a poverty-stricken and dilapidated housing project outside of Paris, a place to which an amalgam of immigrants from countries around the world are relegated.

It is among these other cast-off members of society that the narrator meets his best friend, Drissa, and his first love, Mireille. Drissa is almost entirely mute, and because of this he especially stands out among the immigrants in the housing project. After a while, Drissa can only take so much of the relentless teasing and bullying at school and at home, and he is driven to the point of a mental breakdown. Drissa is dragged away by nurses in the middle of the day in front of the entire neighborhood because he is screaming and raving with anger. This is the first loss that greatly affects the narrator and brings him one step closer to losing his own sanity.

Mireille, the narrator’s childhood friend and first love, is his greatest and most sacred source of safety and refuge amid a hostile environment. N’Sondé’s particularly brilliant moments of writing within this novel come when he is describing the visceral and emotionally charged relationship of these young lovers. As he is sitting in prison among his own blood, filth, and urine, the narrator craves the kisses and embraces of his soft and tender lover: “Mireille, my darling, my love, my peace, this irreplaceable magic, when I’m dozing off, my face against your breast.”

Vague memories of a Congo that he never really had enough time to explore lurk in the background of the narrator’s mind while he endures police beatings in his jail cell. He imagines his ancestors standing in front of him expressing emotions of shame and anger because of his crime and arrest. A nostalgic fondness for his native land lingers more out of a romantic sense of escape from his current situation than any real memories: “We had all been nursed at the breast of protective wild cats, whose gaze was earnest and gentle, and been caressed by their deadly velvet paws. It was that period that marked the beginning of the history of our country, the Kingdom of Kongo.”

It is no surprise that N’Sondé has been recognized with prestigious literary awards including the Prix des Cinq Continents de la Francophonie. His lyrical and descriptive prose is worthy of the attention of a wider English-speaking audience.