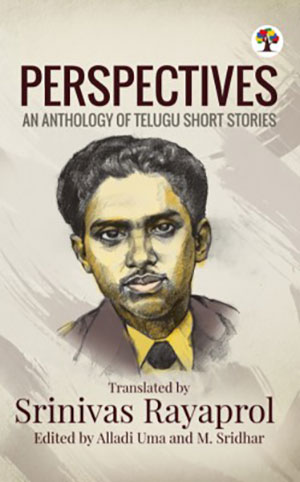 Perspectives: An Anthology of Telugu Short Stories is a collection of nineteen short stories by as many authors (sixteen men and three women), selected and translated from the Telugu by Srinivas Rayaprol (1925–98), arguably one of postcolonial India’s most interesting and least-appreciated anglophone poets.

Telugu, a Dravidian language spoken by some seventy-five million people in the southern states of Andhra Pradesh and Telangana, was Rayaprol’s father tongue as well as his father’s literary medium. This may explain his choice of English, and American English, over British models. His father, the distinguished poet, scholar, and academic Rayaprolu Subbarao, was a great admirer and translator of English Romantic poetry.

Back in India, he founded and edited a short-lived but important literary magazine, East and West, and published three collections of poetry in three decades, eventually turning his creative attention and skills to the translation of modern and contemporary Telugu poetry and short fiction. At the time of his premature death, he had contributed to various anthologies and prepared at least one selection of his own.

The present volume was “nearly finished” when Rayaprol’s daughter, and manager of the Rayaprol Literary Trust, asked the editors to prepare the manuscript for publication. In their prefatory note, they explain how the translator’s method was “so radically different” from their own that they “decided not to tamper” with it, simply ensuring consistency across the entire volume. They further point out how the selection “seems to be purely personal” and its arrangement “unique, for it defies chronology.”

In reality, Rayaprol’s choices are fairly representative of what scholars and critics tend to see as the single most significant subject in modern Telugu fiction, namely the condition of women in India’s rapidly developing society. Most and some of the best stories are about women (although not always written by women), whether they have female protagonists or subjects or address various (and variously disguised) representations of femininity and its discontents.

More relevant—and revealing—than the selection of the stories, though, is their arrangement, which is indeed “unique” although in a different and deeper sense than what is indicated by the editors. By juxtaposing stories with obvious affinities and stories linked by more intimate, subtle, and subterranean meanings, Rayaprol effectively invites readings that are both complementary and alternative to those suggested by previous anthologies of the same kind. This makes the present volume an important addition to both Telugu fiction in English translation and to Rayaprol’s body of published work.