Mick: A Life of Randolph Stow by Suzanne Falkiner 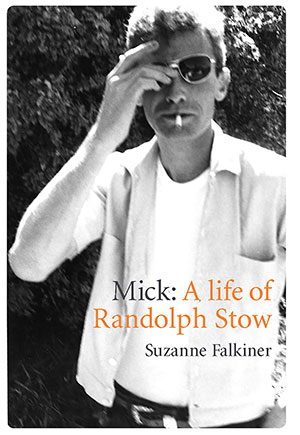 Suzanne Falkiner’s prodigious biography of Randolph Stow is a book long awaited by many; not just the literati of his native Australia but those countless readers who feasted on his novels and wondered what kind of person could write with such imaginative power.

Falkiner’s premise that an author’s works are more accessible when contextualized by the events of his life is well borne out in this 900-page tome. Not only do we come to appreciate what led this renowned Australian writer to create his celebrated fictional works, but we are also given rare glimpses into the inner world of this most private individual, whose personal demons included a dependence on alcohol, two suicide attempts, and struggles with homosexuality.

Although Falkiner probes deeply, she refrains from making judgments about Stow, preferring to leave those up to the reader. Her meticulous research provides abundant material to work with. She wisely avoids an analysis of Stow’s works, something amply covered by other writers and eschewed by Stow himself. Drawing heavily on correspondence between Stow and his mother as well as extensive interviews and exchanges with others, Falkiner traces his peripatetic and unpredictable life from childhood in Australia to his death in England. At times, the sheer amount of detail weighs heavily on the reader, as though Falkiner did not want to withhold the tiniest morsel. But for those craving such detail this comes as a bonus, not a burden.

A feature of the book is the light it sheds on Stow’s poetry, which, while not as well known as his novels, was prolific and widely published. It also opens windows into Stow’s life, since he regarded poems as personal letters written to particular individuals. When seen in this light, his love poems reveal a man who knew he was attracted to his own sex but wrestled deeply with how to express that. As he acknowledged, writing fiction or poetry can help reconcile such inner conflicts.

Falkiner cut her teeth on six previous biographies, which stood her in good stead to tackle this challenge. Against significant odds, she has done a masterful job in painting a portrait of one of Australia’s most revered writers, somewhat akin to what compatriot David Marr did for Nobel Prize–winning author Patrick White. It will no doubt send readers scurrying back to Stow’s novels, which, as Marr once said, is the best news a biographer can hear.