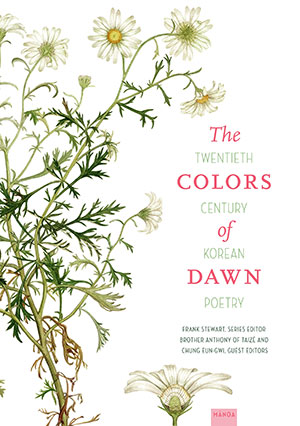 Korea’s rapid ascent to first-world status in the twentieth and twenty-first centuries is astonishing. In addition to economic and political power, Korea offers the world a rich and vibrant culture, most often seen through Korean food, cinema, and pop music, or K-pop. Korean literature, however, as most recently illustrated in Han Kang’s 2016 Man Booker International Prize award for The Vegetarian, is following close behind. The Colors of Dawn: Twentieth-Century Korean Poetry is an instructive and wonderful point of entry into Korean poetry.

The Colors of Dawn is a beautiful Mānoa volume, first printed in 2015 and then reprinted with corrections this year, augmented with delightful floral illustrations by Hye Woo Shin. Editors Chung Eun-Gwi and Brother Anthony of Taizé have selected poems from a wide landscape of modern Korean poetry and do most of the translations themselves. The forty-four poets are organized in three parts: “Poetry of Today,” “Survivors of War,” and “Founding Voices.”

Rather than starting with past and moving to present, the editors start with the present because they see how these poets “speak for the present and foreshadow Korea’s future.” Indeed, these contemporary Korean poets are doing exactly what so many of today’s readers seek: “to find meaning and value in a world of consumerism, materialism, and self-interest.” For example, in “Extinction,” Jin Eun-young warns us: “the world is starting to tilt.” Song Kyung-Dong challenges our borders and the urge to homogenize: “It is morally wrong for me, / being such a borderless thing, to be obsessed with a single idea.” Finally, Choi Jeongrye deftly appropriates Shakespeare in “Shall Time’s Best Jewel from Time’s Chest Lie Hid?”

An essential part of this anthology is the inclusion of so many poets across the span of Korea’s modernization. In part 2, “Survivors of War,” Ko Un’s ten untitled poems stand out as explorations of pain, persistence, and the power of poetry that transcends time. From “The Founding Voices,” Cheon Sang-byeong crafts stark poems whose meaning resides in the aftermath of the reading. <

I mention only several poets and poems here, but this collection is filled with beauty, intelligence, play, and pleasure.