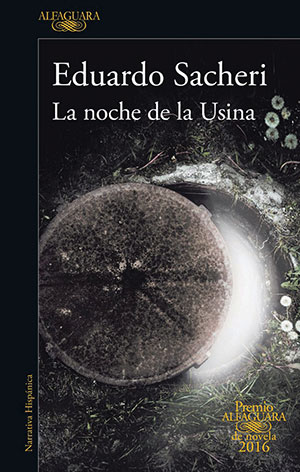 Eduardo Sacheri’s La noche de la Usina won the prestigious Alfaguara Novel Prize for 2016. An accomplished fiction and scriptwriter, Sacheri earned international attention with his first novel, La pregunta de sus ojos (2005), and its Academy Award–winning Spanish-language movie version, whose filmscript he co-authored with director Juan José Campanella. (See the May 2016 issue of WLT for J. Madison Davis’s review of The Secret in Their Eyes, John Cullen’s English translation of this novel.) In addition, Sacheri’s second novel, Papeles en el viento (2011), was made into a movie directed by Juan Taratuto.

Born in 1967 in Buenos Aires, Sacheri, a historian by training and high school history teacher by trade, grounds his fiction in the recent history of Argentina as well as his intense interest in soccer and film. Since childhood, he has been a film aficionado, and before turning his talents to the novel, he had published many short stories dealing with the importance of soccer in the life of his country.

The title of his most recent novel refers to the night the town of O’Connor’s power plant, or usina, was blown up. We learn in the prologue, from the text’s anonymous, well-informed narrator, that everyone in this small town—a literary space Sacheri first developed in his novel Aráoz y la verdad (2008)—remembers that night, but very few people know the real story behind that historic incident. The narrator reminisces about how the Lombardero Brothers Circus used to come to town and how Arístidis Lombardero, the circus’s ringmaster, a spellbinding storyteller who never delivered his brief repertoire of tales in chronological fashion or with the same details, might tell the story. Lombardero is a pretext for Sacheri’s narrator to comment on storytelling and to introduce some of the important aspects of the story before he begins to tell it in a more detailed and chronological fashion.

A group of locals led by Fermín Perlassi, the owner of a service station and movie fanatic who had been a soccer star in the 1970s, opens a bank account with their combined savings of $242,000, which they intend to invest in a storage facility for agricultural products. By chance, as Perlassi is leaving the bank, he crosses paths with Fortunato Manzi, a local businessman who, in collusion with the bank’s manager, takes out a loan that same day for more than $300,000. After Perlassi has deposited the group’s money, the Argentine government, in order to prevent a bank run, imposes the drastic economic measures of 2001 and 2002 known as the “corralito,” or little corral, freezing bank accounts and prohibiting the withdrawal of US dollars. From this point onward, under the leadership of Perlassi, who is inspired by movies like How to Steal a Million (1966), the group of underdogs conspires to recover their money.

This is a carefully crafted story of revenge by a group of quirky characters who, although they worked hard and played by the rules, like many of their compatriots, were taken advantage of by others with more power and influence. Sacheri’s skillful use of suspense and surprise, humor, and development of interesting personal and interpersonal conflicts make this literary treatment of the impact of an economic crisis difficult to put down.