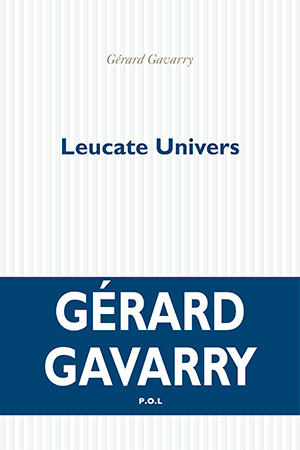 The narrator of Gérard Gavarry’s latest book, Leucate Univers, is anonymous. All that is initially made known about him is that he is eager to learn about the place where he finds himself, Leucate, a small seaside town on the French Mediterranean coast. He will be tutored by a female figure named “Histoire,” who serves as his interlocutor throughout the novel and enjoys all the omniscience that her name suggests.

The text is organized in three parts, focusing on three very different moments. First, Gavarry gives us Leucate in 1589, a fortified town guarding the border between France and Spain. When the fortress is besieged by Spanish forces allied with the Catholic League, Françoise de Cezelli organizes its defense, displaying the kind of heroism that history inevitably records. The second part leaps vertiginously to a more recent moment, the grape harvest of 1955, and it puts onstage a young man named Guy Marquié, who knows his way around vineyards and salt marshes and is as easily familiar with dogs and draft horses as he is with his fellow harvesters. In the third section, Gavarry invites us to consider Leucate in the present, and more particularly in the high summer, when the town is besieged in a different way, this time by young people on vacation seeking to palliate the stresses of everyday life by immersing themselves in the sea and basking in the sun.

As dissimilar as these three moments in Leucate’s history may appear, curious similarities circulate among them. It quickly becomes clear that however bucolic things may seem, violence always looms, whether it be the religious wars of the sixteenth century, the Algerian War of Independence in the 1950s, or still more pernicious concerns about terrorism, internecine ethnic strife, and immigration in the present.

Intriguing narrative analogies prevail among the three parts as well, for “Histoire” in French denotes not only history but also story, and Leucate Univers is patently a tale about storytelling. Yet the most compelling feature of this very remarkable novel is undoubtedly Gérard Gavarry’s language. Suavely evocative, precise, elegant, and utterly original, it may occasionally prompt us to wonder whether we’re reading poetry rather than prose.