Critics, Monsters, Fanatics, and Other Literary Essays by Cynthia Ozick 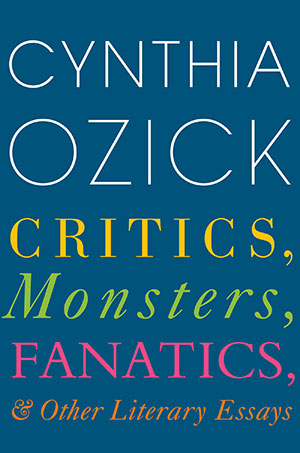 This slender but dazzling collection of thirteen essays, some previously published but refurbished, is primarily concerned with fiction and criticism, both of which Cynthia Ozick practices with ease. It is clear that she is not a reviewer but a critic. Reviewers are allocated a certain amount of space, while critics can—or should—be given free rein, addressing not just the work but its relationship to the world in which it gestated and into which it arrived.

Naturally, such critics are rare. Most can synopsize and summarize, but not all can judge, the root meaning of “critic”—one who can adjudicate, producing something akin to literature. Ozick asks as much of critics as Alexander Pope did in “An Essay on Criticism,” who demanded “a knowledge both of books and humankind.” Ozick is very much the kind of critic Pope envisioned. The epigraph is taken from Pope’s essay, and the title was suggested by Pope’s challenge to critics, urging them to attack the excesses of the age: “These monsters, Critics! with your darts engage, / Here point your thunder, and exhaust your rage!”

Two such critics who can satisfy Ozick’s criteria are the polymath Edmund Wilson and Lionel Trilling, who based his criticism on moral as well as aesthetic grounds. To Ozick, the ability to wield language creatively, even in letter writing, is paramount. She praises Saul Bellow’s letters both for their expression and insights. The prose may not be as inventive as that of the novels, but the letters are a worthy ancilla.

Ozick has never considered the Holocaust a horror of the past but an ever-present reminder of hearts so hardened and “so inhumanly wicked, that only God can fathom them.” Ozick does not claim to fathom the darkness of the heart, only to expose it in the profoundly disturbing “Love and Levity at Auschwitz: Martin Amis,” a reflection on Amis’s novel The Zone of Interest. As Matthew Arnold might have said, Ozick saw literature steadily and saw it whole. . . . Pope would have welcomed her into the pantheon.