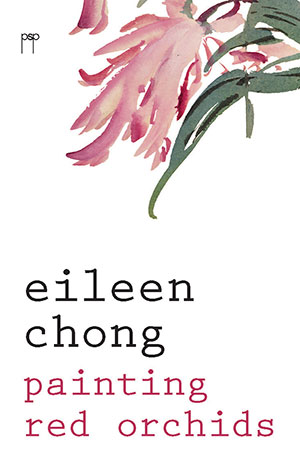 Eileen Chong identifies writing as “an act of recovery, of piecing together, of recording, re-ordering and re-inventing.” In Painting Red Orchids, her third collection, the poet scans the stormy dissonance of places populated by particular emotional weathers, and this short book of lyrical investigation is a virtuosic performance of “questions fall[ing] like wet leaves” against, perhaps, the wet black boughs of turbulent experience.

Originally from Singapore but residing in Sydney since 2007, her exile is undertaken within a “land of // eternal summer,” and Chong’s photoreal poems capture themes not only of identity and belonging but also love and, indeed, loss. At the book’s heart, fragilities are underwritten by the emotional violence of a failing marriage. Lorn and then despairingly alone, the poet asks: “Where does the woman without a country / return to? For a human voice, the TV, / song, poetry. For touch: not even a cat.”

These texts are never simply plaintive but instead act as quietly elaborative cathartic mechanisms by which the poet seeks for more precise orientations. The scenery throughout is domestic, intimate, bucolic: meals cook, the ghosts of grandfathers are apprehended by pets, the everyday populated with galleries, cobblers, coitus, poets (alive and dead), “shadows and fallen blooms,” memories (also alive and dead), etc.

One senses that, for Chong, these texts act as rites beyond the estrangements, emancipations toward more certain knowing in places where “[e]verything / is drenched in sunlight.” These are indeed the “dreams of one who has come far,” but they are also poems of “beginnings and possibilities” that often require complex affective maneuverings. In “Exorcism,” the poet places a photograph from a new lover’s wallet in a rubbish bin before returning the next morning to “set a live match to it”; thereafter, “[t]he fire died out, but one eye remained, staring,” and this is emblematic of Chong’s understated surreal hauntings. These lyrics set her traversing often spectral dramas parading with displaced moments and intimacies weirdly transmuted, as if writing them into resonant lines are the means by which to make a recovery.

Finally, then, this is a book of returnings in which the poet meditates on suffering as a means by which she attains clear-mindedness around “what it means to die and live again.” Painting Red Orchids is compellingly bright with hope, a book of watchfulness and perhaps even vigilance, each measured line surveying minutiae for possibilities and magnitudes, epiphanies among the ellipses. In equal measures, Chong investigates the psychic shifts between coming “adrift, far from rock and shore,” and her stranger arrivals at new moorings.