Paris Berlin New York: The Color of the City by Wolfgang Hermann 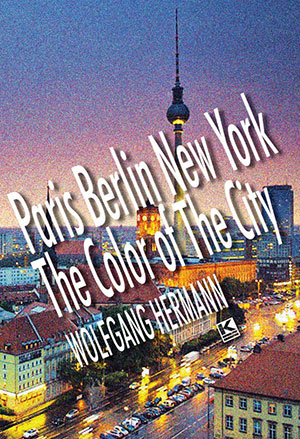 Western literature is full of accounts of vagrancy and tales of the flâneur. So why would we need yet another? Wolfgang Hermann’s Paris Berlin New York, collected here in one translated volume with a critical essay by Mark Miscovich, is a work that exceeds expectations and proves that the theme is anything but exhausted. In fact, Hermann’s book situates him in the same orbit as Baudelaire’s Paris Spleen, Orwell’s Down and Out in Paris and London, as well as the postmodern master W. G. Sebald. In terms of writing style, Hermann’s is closer to Baudelaire’s than the others, despite carrying the feeling of being absolutely contemporary.

Paris Berlin New York reads more like prose poems than a series of short stories. What the reader gets is a series of snapshots of place, often eerily uncanny places like those that arrive in dreams. Reading Hermann is like grasping at the residue of a dream that stays with us just long enough to either make a suggestion or leave an ephemeral imprint on our consciousness.

The book is divided into four sections. “Paris,” “Berlin,” and “New York,” which make up the first three sections, are told in the first person, and the narrator wanders those cities like a ghost moving through the walls of some ancient ancestral home. There is a sadness, an errancy, to these pieces, as if the narrator is a wisp of smoke drifting toward some unobtainable destination. “The places I go through, go all the way through me. They fill me with their weight and gravity, their inertia and lethargy and give me the emptiness, muteness, volubility, or in the worst case, loquacity, which leaves me sad.” With each new place he finds himself traveling through, the narrator is transformed, perhaps only slightly, imperceptibly, but transformed nonetheless.

“The Color of the City” is a third-person novella and hovers around Christian, a provincial in his late twenties now living in an anonymous European city. Surrounding him are a childhood friend, Stephen; a love interest, Julia; as well as Margi. The four are drifters, not only through the city but also through life. “The Color of the City” takes up many of the same themes as the previous pieces but adds a narrative of loneliness to its vagrancy.

Wolfgang Hermann is an author who deserves an audience. His prose strikes a chord that pulsates through the reader. Paris Berlin New York is an outstanding work and a perfect opportunity for readers who do not read German to encounter him, for reading him is indeed an encounter. Mark Miscovich’s smart and highly poetic translation is sure to put Hermann on the map of contemporary world authors making their way into English.