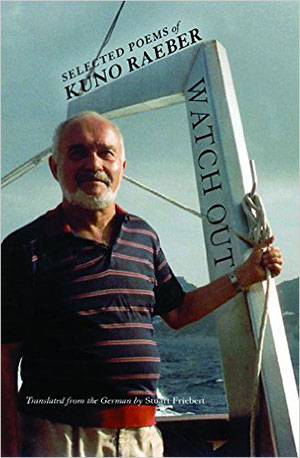 According to the back cover of Watch Out, “Many critics count [Raeber] among the more significant writers of the second half of the twentieth century.”I agree. Kuno Raeber’s exquisitely artful poems express a spiritual shift that fits many post–World War II psyches. These poems abandon religious dogma, arguing powerfully for the legitimacy of direct spiritual perception.

Raeber was once a Jesuit novitiate. When that experience “ended in disaster,” he suffered a spiritual and psychological loss. “For me,” he said, “the church contained everything.” Depression took hold, but eventually Raeber discovered that the physical world could fuel expression of his spiritual intuitions.

In Watch Out, his perceptive faculties reclaim ancient imagery and symbols, creating an old/new point of contact between the individual and a greater cosmos. “Upright, you’ll / shoot up at some point mute and shackled / on the stony seat in back, scared / from sleep and see / the rooster, its eyes smashed / to splinters, broken in pieces on the pavement . . . / But like then, remember? remember?, / a single cricket will / chirp . . . / And look, outside / there’s someone still pushing, like then, his new / bicycle by and whistling.”

Raeber’s deep obsession is with reality, and in reality a lot goes on. You may be experiencing a moment fraught with finality and death, but someone else is enjoying his new bike. Raeber’s psyche is awake, upright, willing to connect directly. He sees, he accepts, he refuses to interpret, as in the poem “Twilight”: “Twilight and a gentle breeze / from the meadows. / The path / a snake alone / into the unknown and white.”

Raeber also investigates man-made vistas. The third section of the book, “Steps, Winding,”focuses on cities, those Ozymandian edifices that attempt to create a foothold in eternity. In “New York,” he writes: “Skyscrapers as new / bodies for / Venetian senators torn / down in the construction and / endlessly erected / the processions / of scarabs / of pharaohs.”

He describes Sixth Avenue where, despite man’s apparent control of the world, nature asserts itself: “An Uptown wind drags / Downtown the feathers / the down plastered with tar and mud / the avenue / Uptown Downtown torn / off by the east wind the feathers / filthy the down / plastered with tar and mud.” We build cities, then rebuild them, again and again as if this one, this last one, will stand forever. But cities fall while feathers, however besmirched, remain.

Stuart Friebert’s long friendship with Raeber and close reading of these poems make him a superb translator. Using the poet’s vocabulary and rhythmic patterns, he brings Raeber to life, introducing us to a different kind of mystic—a realist whose aesthetically gorgeous spiritual investigations refuse to overreach.

And in the end Raeber claims no definitive understanding of the cosmos. His poems issue no promises. No certificates of certainty. Life, for Raeber, is decidedly ambiguous: “Below / right at the bottom of the fountain suddenly / open expanse. Sails / next to the swans. But / up through the cracks / fumes of blood.”

The “disaster” that ended Raeber’s stint as a Jesuit novitiate destroyed his sense of the world. Raeber’s poetic investigations mitigated the pain and filled the vacuum created by the breakdown of his early beliefs. He started over, rebuilding a relationship to his experience, to things he could know and things he had to accept as beyond his ken. Although the particulars of crises differ, many of us share this task.

Raeber’s work is a window into a singular mind in the process of becoming conscious. His poems do not comfort, but they do provide challenging companionship. That alone is valuable, but in Raeber we also get word art of the highest order. Like Caravaggio, he understood that even in darkness and shadow, beauty persists.