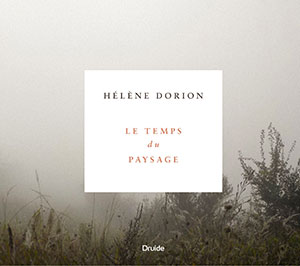 Hélène Dorion’s two latest volumes are autobiographical prose poems written in homage to her dying parents. In Recommencements (2014), Dorion offered an emotional tribute to the bond she shared with her mother. Le Temps du paysage is an existential homage to her father. A writer-in-residence guest of the Civitella Ranieri Foundation, Dorion sojourned in Umbria in 2015, revisiting “my life’s roots . . . to inhabit [the landscape] as much as it inhabits me.”A telephone call abruptly ended her stay just as she returned from a morning walk and plunged her into a mental fog that mirrored the fog shrouding the landscape.

Fate ushered for Dorion three “landscapes of time”that structure the book. These three “windows” of existence are introduced with quotes by French writer Pascal Quignard. First, repeated time, as one has to traverse grief anew to reach life. Second, frozen time, as “something” unseats the soul in the body. Third, time reversed as love reverses the course of one’s life. These three life frames host a voyage through memory, a long litany of memories as Dorion walks alongside her father during his last moments. Experiencing her own pain, then her father’s, placed in a state of heightened mental alertness by fog, which causes her to lose her sense of direction, the poet discovers the ultimate counterpoint: at the limit of itself, life becomes renewed. Abandoning herself to the winds, the mountains, and the sea, she experiences an “infinite awakening of the soul to itself.” Death makes her want life more; surprised by love and beauty, she feels fully human.

The photographs are contrapuntal as well. The only clear objects are stems of tall wild grass—fragile, abandoned to fate, worry-free. Fog makes us appreciate the colors of blue, green, white—the sole evocations of color except for the blinding light of epiphanies. Le Temps du paysage fuses verbal and visual discourses in search of a “revelation of life.” Dorion concludes: “We write to reconstruct within ourselves the fragments of beauty that were lost along our life . . . we write perhaps to touch this fury of eternity that haunts us.”