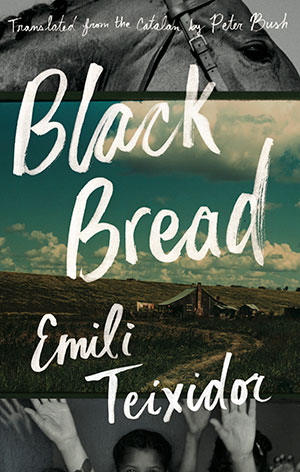 There is nothing more profound than the realization of what war does well beyond its official end. Peter Bush has given us a poetic translation of Emili Teixidor’s novel Black Bread, in which each line seems to be given complete attention and where Teixidor has loaded line after line with both wonderful and terrible beauty. From the opening scene to the finale, the narrative of war and chaos and coming-of-age is underpinned with what seems an eternal forest—a natural world that holds secrets and desires and will ultimately outlive all the pettiness that is humanity.

Though the narrative of Black Bread is based in Catalonia just after the Spanish Civil War, it is a timeless setting for contemporary humanity. This is a novel that will stick with us because of the continued relevance of divisive social orders in addition to the complexities of religion and politics. Telling a story of war, class divisions, sexuality, religious doctrine, executions, and fascist rule from the point of view of a young boy is, perhaps, one of the best ways to deliver a litany of existential questions without a hint of preachiness. It unfolds flawlessly, through honest characters, scenes, and descriptions of rural Spain. From the start, we are folded into a familiar world—the close relationships that children have as they grow up together; the hard-working family; the grandmother with infinite wisdom.

Ultimately, Emili Teixidor’s novel allows us to see aspects of ourselves by situating us in moments of sympathy for the speaker. Teixidor’s linguistic brushstrokes paint everything we need in order to see ourselves just as the speaker finally does himself: that we are, in the end, always somehow at war within ourselves. That we are all doomed to someday grapple with moments so uncomfortable and arresting that we might find ourselves completely changed into something we no longer recognize.