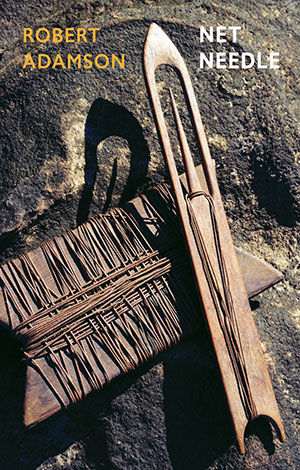 In Net Needle, poet Robert Adamson spans the range of contemporary English prosody with poems that tenderly attest to an endangered environment. The book invites the reader to take these poems as a personal history.

The first of four sections features mostly lyric poems. Adamson describes a childhood on the eastern Australian coast where old fishermen on Blue Point wove or mended their nets, where the urban mingled with the wild. This landscape is fifty years lost and sometimes so haunted that it becomes “difficult to move” there. Reflecting on this time and place in the poem “Via Negativa, the Divine Dark,” the speaker claims that he has “forgotten the names of most flora and fauna” and must reconcile himself to “forms / grown vague.” His attention to detail belies this sentiment. The men in the titular poem, “Net Makers,” populate his memory precisely with their craft and traditions.

The second section becomes more dense and narrative: the poems are often in longer lines and stanzas. In “The Shark-Net Seahorses of Balmoral,” the poet describes in third person the interior life of a boy as he snorkels in the bay, watching the wildlife of this protected sea. Adamson describes how “the boy looked for his favorite creatures, seahorses,” which hover “in clear sight of the old fish,” a dangerous predator rendered harmless on the other side of the shark net that encloses the bay. The seahorses, like the boy, are protected within the innocence of vague knowledge.

Each of the four sections of Net Needle progresses thematically and prosodically. At the close of the second section, the main character becomes a young man serving hard time at Long Bay Penitentiary. In the third and fourth parts, there are lacunal, alliterative verses, prose poems, and fantastic pieces such as “Poem Beginning with a Line from William Blake,” which describes a kind of eight-story cabinet of curiosities. The first floor we visit is an apiary; on the eighth, we are challenged to “forget the myth of honey” and left searching “for the word trauma in the eyes / of strangers.”

The poem that follows, “Ballad of the Word Trauma,” most clearly shows the bond that threads between many poems and in all sections of Net Needle. With attention to craft and detail, Adamson weaves together a book that captures the most enduring, most fragile landscape of all: living memory.