The Book of Joan by Lidia Yuknavitch 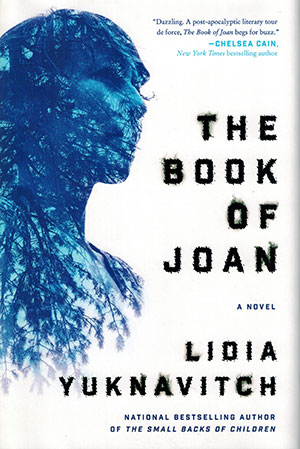 The war for earth is over; the earth lost. That, in a nutshell, is the opening situation in The Book of Joan.

Some of the powerful have escaped to a sort of space platform, ruled by a dictator, improbably named Jean de Men. Those left on earth live a subterranean existence on what has become a ball of dirt. Skylines from the platform to earth suck resources from the earth and, where they can find them, human beings as resources.

The eponymous Joan, a legendary figure, has the ability to draw currents from the earth to defend herself and her companion. And those, like her, left on earth, stay in a state of war with those on the platform, attempting to survive, to find and destroy skylines and the outposts that defend them.

There is also a resistance on the platform, where the elite cover themselves with skin grafts. A few are etching texts on their skin, including the stories of Joan, who was supposedly burned at the stake. The problem on the platform, apart from the oppressive rule of de Men, is that humans have lost the ability to reproduce, though something like love exists for some.

The title suggests a plot embroidered by thoughts that transcend the action, implying perhaps a problematic supernatural. Indeed, with names such as Jean de Men, Christine, Trinculo, Joan, and a platform called CIEL, the teasers are there. And there are the grafted stories of Joan and a real Joan. We are intrigued, even if we are not entirely satisfied.

I spent several foolish minutes puzzling over certain letters on the cover and spine that had a sort of gray smudge. I was thrust back to high school, filling out a book review form that asked me to complete “The theme of this book is . . .” The novel certainly has perspectives: an opening analysis of humans’ impossible situation, meditations on what has been lost and is now sought for, humans as part of all matter and energy, united with other “raging organisms that won’t give up”—a rage that can seek love or death.

Can aspirations against circumstance ever succeed in a postapocalyptic setting? A climactic battle has movement, violence, color, joinings, and sunderings, all in a haze, with theatrical shafts of light. Things happen, certainly—destruction and unification—but we see darkly. Our failure to have a clear view of an outcome corresponds to an earlier, blurred demonstration of possible earthly regeneration that does not quite suspend disbelief.

The Book of Joan is an impressive structure built of stories and meditations, worshipful of life, love, and resistance. It offers hope, without a consoling clarity. That may be as much as the survivors of a human-induced apocalypse deserve.