Dogs at the Perimeter by Madaleine Thien 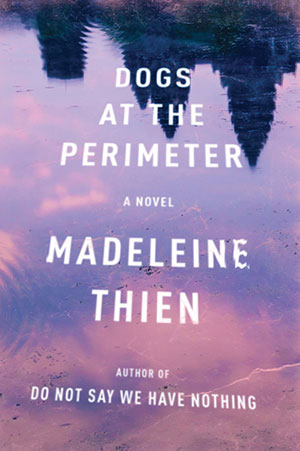 Dogs at the Perimeter is the second novel by Madeleine Thien. Her first novel, Do Not Say We Have Nothing, was shortlisted for the 2016 Man Booker Prize. Dogs at the Perimeter weaves between time and geographic area, with some chapters set in modern-day Canada and others set in 1970s Cambodia, when the Khmer Rouge was restructuring the country.

When the narrator, Janie, was a child, her family was uprooted by the Khmer Rouge and became refugees. Janie was later adopted by a Canadian family and eventually became a scientist. When her colleague and close friend, a neuroscientist named Hiroji, suddenly disappears, she begins her search for answers. She reads his case files and sees how the brain is both mysterious and fragile, especially when it experiences trauma. Janie realizes that Hiroji must have traveled to Cambodia in search of his brother, a doctor who became lost after being sent there in the 1970s. Hiroji’s mission to find his brother brings out memories of trauma that Janie and her family experienced in Cambodia. Through the parallel stories of Hiroji and Janie, the reader meets characters who have been victimized by separation and violence, and their trials show the unbending human spirit.

Thien does not offer the story in a straightforward way; instead she uses patient files, letters, and memories. In this way, the reader receives fragments, with the clear picture coming together only after all the narrative pieces fit together. This style of storytelling mirrors the brain. Just as the mind does not think linearly, the story is also not linear. Although the reader must wait to get the full picture, the characters are captivating from page one, and the details of their lives are worth waiting for.

The trials that Janie’s family go through test each and every dark impulse that may exist within them, and their perseverance is one of the most compelling aspects of the novel. Despite Janie having a new family in Canada, she is still affected by trauma and finds it impossible to completely leave Cambodia and her childhood behind. It is through her eyes that the reader experiences the history, resilience, and heart of the Cambodian people.