The Ministry of Utmost Happiness by Arundhati Roy 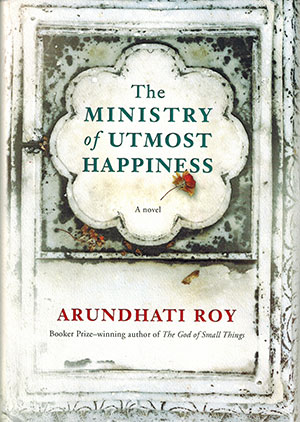 Many reviews of Arundhati Roy’s The Ministry of Utmost Happiness have discussed its engagement with the larger political history of India’s last two decades and its representation of the Kashmir conflict. Adopting a slightly different tack, I focus on the novel’s concern with presence and absence in history. Ustad Kulsoom Bi, a hijra (eunuch), gets excited by the brief mention of court eunuchs in a show about late Mughal history at New Delhi’s historic Red Fort: “The moment passed in a heartbeat. But it did not matter. What mattered was that it existed. To be present in history, as nothing more than a chuckle, was a universe away from being absent from it. . . . A chuckle . . . could become a foothold in the sheer wall of the future.”

Contrast this with the opening coda that describes the disappearance of sparrows and vultures from urban Indian spaces. The causes for the disappearance of the sparrows remain unspecified, but their absence leaves an aural void that the noisy “homecoming” of crows and bats cannot fill. The vultures die of “diclofenac poisoning” after feeding on the carcasses of cattle pumped with the chemical. Diclofenac turns cattle into “better dairy machines” but works “like nerve-gas on . . . vultures.” The narrator says: “Not many noticed the passing of the friendly old birds. There was so much to look forward to.” In the epic march of discourses of development, the vultures lose their foothold in the wall of the future.

Contiguously, in the first quarter of the novel, the narrator focuses on people massed at the edges of the Jantar Mantar—a Mughal-era observatory in Delhi also doubling as a space for political protest. A majority are fixated by “the newest show in town”: the media spectacle of the anticorruption protests spearheaded by the social activist Anna Hazare in 2011. The narrator, however, shifts the gaze from the media spectacle to the largely invisible protests of populations clamoring for footholds in public discourse like the victims of the 1984 Bhopal gas disaster and the Association of the Mothers of the Disappeared from Kashmir. Outraged by the “audacity” of the Kashmiri women, no TV camera pointed at them, “not even by mistake.”

While the spectacle of the anticorruption protests gives its participants a sense of participating in epic History—“India’s second freedom struggle”—the novel’s spatial focus on margins and backdrops impels us to look backward at populations and nonhuman entities struggling for footholds in the future. No wonder then that the novel’s dedication is to “The Unconsoled.”