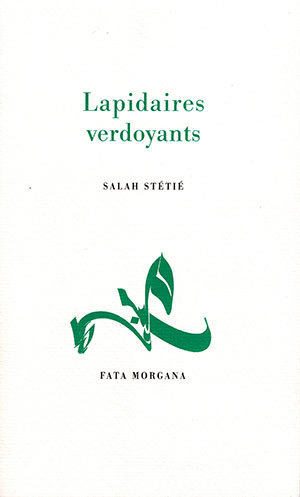 In the early pages of this book, the author claims that the French word hasard (“chance”) derives from the Arabic word az-zahr (“the flowers”). Some lexicographers may disagree with him, but Salah Stétié is perfectly fluent in both languages and is speaking as a poet, rather than as an etymologist.

Both chance and poetry are much on his mind in Lapidaires verdoyants, a collection of eleven essays on literature, mostly (but not exclusively) French literature. Often, the writers whom Stétié invokes are canonical ones, like Paul Valéry, Julien Gracq, and Paul Claudel. Some, like Fouad Gabriel Naffah, a Lebanese poet whose career Stétié championed until Naffah succumbed to schizophrenia, are far less known. At times, Stétié reaches back into literary history (Rousseau) or into other cultural traditions (Tagore, Rilke, Beckett, Celan). As Stétié speaks about these writers, he provides a good deal of information about his own literary tastes and practices as well as the constellation of people who influenced him. Those include poets like Nerval, Baudelaire, Rimbaud, and Mallarmé; more recent figures such as Apollinaire, Jouve, Char, and Michaux; and, finally, poets of his own generation like André du Bouchet, Yves Bonnefoy, and Michel Deguy.

In the title essay, the last one in the volume and by far the longest, Stétié proposes a dialectic opposing the desert with the notion of “greening” and deploys it in a meditation on figures as diverse as Joyce and Jabès, Rumi and Meister Eckhart, Goethe and Hölderlin. The pace is heady, and the connections that Stétié makes between those figures are sometimes fragile. His tone is lyrical and intensely personal: certain readers will find those effects engaging and invigorating; others will find that they get in the way of Stétié’s critical purposes.

There are interesting moments here when he ponders his own “ambiguous” relations with words, or the way that he feels himself to be a dual citizen of Beirut and Paris, or his skepticism of the very idea of “francophone” literature. Those moments testify to a significant mobility of spirit and to a fundamental restlessness that serve this poet well.