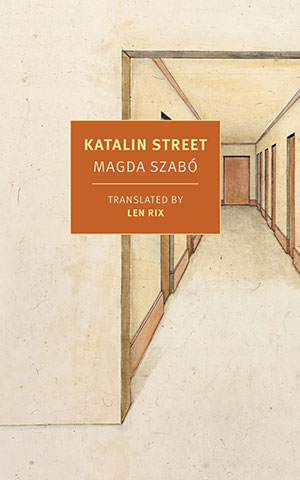 Katalin Street is the third Magda Szabó novel to be published by New York Review Books Classics. Szabó, who died in 2007, was a Hungarian author whose work examined the intersections of fascism, betrayal, family, and love, among other topics. Her prose is a powerful reminder of just how resonant the relationship between language and memory can be, especially when entangled within the matrices of families and communities living under the shadow of fascism.

Katalin Street, which won the Prix Cévennes for Best European Novel in 2007, depicts the lives of three families thrown together on Katalin Street in Budapest from the prewar period up to the tumultuous unrest of 1968. The children who figure prominently in the three families are Blálint, the son of the major; Irén and Blanka Elekes; and the shy and reserved Henriette Held. When the Germans arrive in Budapest in 1944, members of the Held family, who happen to be Jewish, are placed into hiding until they are discovered and deported. However, Henriette manages to escape deportation only to suffer a no less tragic fate.

As provocative as the events in the novel are, the style Szabó employs is also worthy of our attention. The novel itself can be confusing until the reader discovers that it is not told in a linear sequence. This confusion adds to the overall atmosphere of the novel, an atmosphere that is heavy with foreboding. The disruptive manner of the novel’s beginning highlights the coming storm that the Germans, and later the Soviets, are bringing to Hungary. Moreover, each chapter in the “Moments and Episodes” section switches between third person and first, which is told from Irén’s point of view, thereby juxtaposing a detached and intimate point of view.

There are moments in Katalin Street when one is strongly reminded of Harry Mulisch’s The Assault. Both novels deal with German occupation and the culpability of unlikely individuals and communities. Both novels are powerful testaments to the human spirit in the wake of occupation. Szabó’s novel also delves deeply into the meaning of home or what it means to be at home in a world where the concept nearly collapses in on itself. Len Rix’s translation is easy to read and thoughtful enough to slide into the background. Katalin Street is not quite the masterpiece The Door is, but it is a brightly shining star in the Szabó universe, offering us a glimpse of Eastern Europe at a time when we need to be reminded of what happened there more than ever.