If I Were a Suicide Bomber by Per Aage Brandt 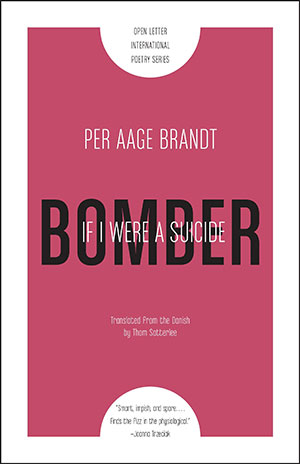 Thom Satterlee’s translation, with facing-page originals, of the eminent Danish poet Per Aage Brandt is a great opportunity for the anglophone poetry audience to get acquainted with this quirky and engaging contemporary poet. Satterlee has provided a convenient sample from five of Brandt’s volumes, spanning the years between 2007 and 2014. Brandt’s poems are compact—usually ten lines, sometimes less—but rarely do they feel frivolous. The poems are by turns—or sometimes line by line—witty and weighty. They are invariably worthwhile.

The compactness of these poems gives them an epigrammatic quality, but reading a number of them in succession puts one more in mind of Montaigne than of Martial. That is, the poems read like very tight verse essays, or assays. They try out and try on various ideas and perspectives. Often they express a strong but frustrated desire for transcendent meaning, as when, early in the volume, Brandt writes, “the morning light seems to want to speak” or, later and a bit more idiosyncratically, “the cat jumps up onto my computer / and vomits, that has to mean something[.]” Toward the end of the volume, he describes rain that sounds “as if the sea-dark truth was music’s / deeper meaning, which we still don’t believe[.]” Elsewhere in the book, Brandt turns this quest for a meaning always denied into a dialogue with the great Danish philosopher Søren Kierkegaard.

Brandt has a marvelous habit of treating ideas almost as tangible things. In the title poem, for instance, he fantasizes about finding an isolated spot, concentrating on “the world’s most / insane, stupid, malodorous, and in every / respect repulsive ideas” until they are practically solidified before his eyes, and then detonating a bomb to blast the ideas, along with himself, out of existence. In a later poem he explains that “every time we think about the same thing, / the brain makes a new copy of the idea,” so that we can, without destroying the original, “twist and turn it, tear it into / tiny little bits and put it back together again / in the wrong order[.]” This tendency to treat ideas as things contributes greatly to the playfully intelligent tone in much of Brandt’s work.

The ideas that this Danish poet twists, turns, tears up, and reassembles touch on politics, sex, music, the secret life of animals, and innumerable other topics. A cognitive scientist and musician as well as a poet, Brandt is a broad thinker and writes a kind of poetry that seems bigger on the inside than it is on the outside.