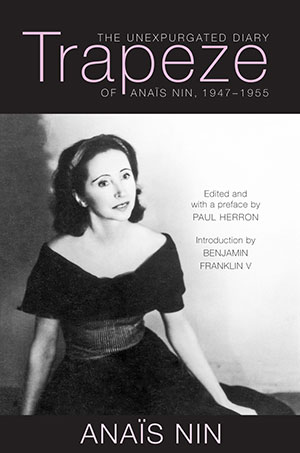 Over one hundred years have passed since 1914, when an eleven-year-old Nin began her first diary. The young Nin embarked on the first edition of her now-famous oeuvre during a time of great familial turmoil, after her father had deserted the family to pursue an affair with one of his musical students. Nin would continue to painstakingly author, rewrite, and copy out the diaries as part of her comprehensive life’s work spanning the next sixty years; capturing, reflecting on, and crafting her intellectual and artistic development. As a female artist who could not find a world quite worthy of her dreams, Nin bravely created one. She penned rich psychological theories, lascivious intimate relationships (including one with her own father), and insights into the realm of writers, artists, and actors of expatriate Paris in the 1930s and beyond.

Nin’s diaries still challenge and astonish today because she was utterly daring. Nin spent most of her life married to banker, artist, and filmmaker Hugh Guiler, yet she strove to keep her adventures and secret extramarital affairs locked within the pages of the diaries (even in bank vaults, at times) until the truth could be revealed without injuring those she cared about. The unexpurgated diaries illuminate the spectacular process of self-mythology for a courageous wife, lover, and artist. Trapeze resumes where Mirages left readers lingering: after Nin met the handsome and much younger Rupert Pole.

Though I initially assumed the title Trapeze referred to the ambiguous nature of truth Nin deftly traversed in order to live her multiple lives, in reading the diary it became clear there was much more to this perilous vacillating than I’d supposed. In the fifth volume of Nin’s Unexpurgated Diaries, a mature evolution within Nin’s life is revealed. No longer thirsting to try everything (and having already danced with danger, love triangles, and incestuous affairs), an experience-sated Nin now longs to select just the right life for herself and to share what she has lived through her work. Nin is torn between a loyalty to her husband and hopes for a future she dare not trust completely with her new lover, Rupert Pole. Perhaps Nin’s neurosis was not that she failed to select just one of these lives or loves but that she felt it so necessary to decide between them.

In her signature poetic yet lucid prose, Nin expresses uncertainty with courage but no definitive answers—at least not immediately. Trapeze carries us from the convenience and bustle of New York and Guiler’s attachment to the trips where the vacations of sunshine, mountains of Los Angeles, and Rupert’s growing love anchor her in a life she hadn’t previously imagined. The contrast between these two lives is documented by Nin in frenzied rebellions. When she is with Guiler, she talks herself out of the romance of Rupert and into their “mutual accord,” yet when with Rupert she doesn’t wish to return to Guiler. Striving to reconcile a split existence, Nin finds herself marking down dissatisfactions with each man’s shortcomings and tempting fate in thrilling ventures, although she cannot help but behold both with understanding, compassion, and love.

Trapeze offers Nin’s solution to such a dilemma: embrace ambivalence. Choose everything, choose both, choose between, and choose all.