Her Body and Other Parties: Stories by Carmen Maria Machado 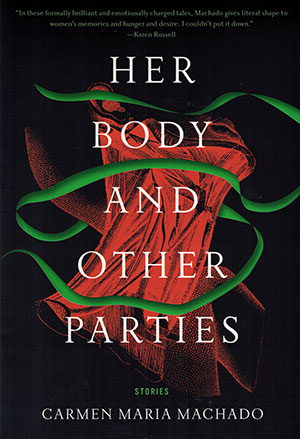 Carmen Maria Machado’s debut short-story collection, Her Body and Other Parties, reveals a new herald for the New Weird, marking Machado as one of the genre’s foremost voices alongside Caitlín R. Kiernan, China Miéville, and Jeff VanderMeer. Machado is also, indisputably, an anti-Lovecraft. Whereas Lovecraft—the brightest of the genre’s elder dark stars—abhorred the body, sex, and sexuality, and manifested his disgust through horrifying, polymorphic figures like Cthulhu and the shoggoths, Machado’s tales rejoice in the body and its pleasures, embracing sex as weird, arousing, messy, yet altogether human. The horror stems not from the presence of the body itself but from the body’s contact with constructs like gender, sexuality, and propriety. With her debut collection, she molds genre, form, tone, and subject like a master of the craft, wielding the most beautiful, haunting prose this year.

Machado’s collection of eight stories—all but one, “The Resident,” previously published—has been anticipated since “The Husband Stitch” was nominated for the 2014 Nebula novelette award. In this rending tale of a woman’s lifelong encounter with the goodness of “good men,” the story-obsessed narrator reminds us before her death, “Stories can sense happiness and snuff it out like a candle.” Like this urban legend send-up, Machado’s horror fables bend generic forms to, among other things, narrate a viral apocalypse by way of a memoir about the narrator’s sex life (“The Inventory”), chart the slow dematerialization of women whose spirits haunt dresses and other traditionally feminine objects (“Real Women Have Bodies”), or rework the plot of Law and Order: SVU to literalize the ghosts of sex-crime victims and the emotional toll on SVU detectives, blending gothic, fan fiction, and TV recap in a drama that both deepens and purges the violence and pain of such crimes (“Especially Heinous”). With stories like these, Machado’s oeuvre simultaneously defies and attracts categorization.

Machado is a revolution. She is at once a funny, dark, terrifying, uplifting anti-Lovecraft who observes in the everyday oppressions of heteropatriarchy and late capitalism what is truly horrifying, nonetheless finding release in the dark’s nooks and crannies. As a queer Latinx woman trained at both Iowa and Clarion, prestigious credentials for literary and genre fiction alike, she writes from many worlds, not so much breaking down the borders between them as finding in their gaps and necessary contradictions a literary form necessary for the contemporary. Her Body and Other Parties is fiery, mischievous, and elusive. Like the worlds Machado glimpses: brutal and yet life-affirming.