In the Woods of Memory by Shun Medoruma 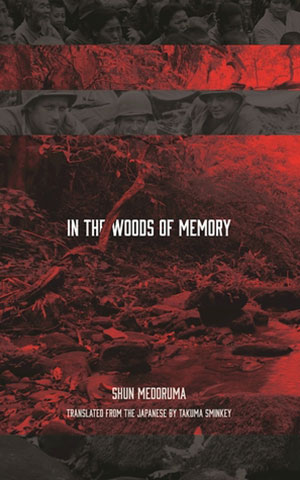 Set during the American occupation of Okinawa, In the Woods of Memory centers on two events that send cracks running out in every direction, linking together a constellation of characters who are left to reconcile the resulting trauma. The first event is the sexual assault of a young Okinawan girl named Sayoko by American soldiers, and the second is born out of the first: a young man named Seiji who strikes out in revenge.

Okinawa is devastated when the United States begins its occupation, and the people living there are only able to survive day to day with the rations and aid they receive from the very people who conquered them. This means the villagers have no way to retaliate once the American soldiers begin to make a habit of preying on the girls of the village. Many of Shun Medoruma’s characters roil with the combination of burning resentment and crushing shame resulting from relying on the benevolence of the very people who have assaulted the community.

This attention to the rich inner lives of characters is one of the places where the novel shines. It isn’t a dialogue-heavy novel; instead, Medoruma focuses on showing how characters interpret and interact with the world around them and where they seem to believe their place in that world is.

The novel is populated and narrated by a cast of characters coming from all sides, weaving the unique perspectives of Okinawans, Japanese, and Americans together into a multifaceted understanding of the complex situation. These varied individual accounts overlap and connect into a story that feels three-dimensional in a way that allows readers to experience the story several times over from each angle and piece together the points where they intersect.

Decades pass by in the novel, but for readers, the century turns in a matter of pages, leaving the event as fresh and tender in their minds as it remains for the characters themselves. Sixty years later, those present for the exploitation bear these wounds. The situation of the narrative within a contemporary context brings the entire story uncomfortably close—an unsettling feeling magnified by the translator’s preface, which reminds readers that this story continues to be written today.