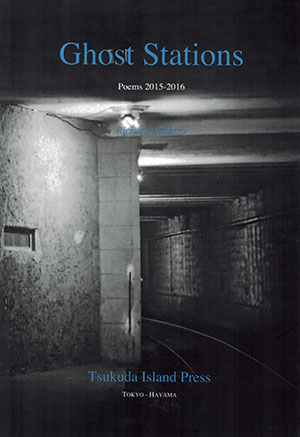 Poems by Richard Milazzo and a folio of black-and-white photos by Fausto Ferri provide beautiful images and a ghostly nostalgia of a world falling apart. Four ghost stations are the actual East Berlin train depots that were closed to West Berliners when the Wall existed. One is on both covers. Milazzo points out that these are not the only ghosts—other instances of abandonment include the “white flight” that hollowed out American cities. And he says: “What happened to Castelfranco Emilia [Ferri’s hometown] happened to many urban areas around the world, especially in Third World countries, which were and continue to be exploited by urban developers, not only destroying city life but the environment.”

Ferri’s images from 1974 (exhibited in 2016) reveal his witness of forty years earlier, as his town was beginning to disintegrate. Upon returning, the before and after views “come back to me now, with all their emotional charge, when I look at these images of places I no longer recognize, images that I can no longer locate in the right place in the mental path of those days when I walked around in the old town, lost in the ever-shifting topography of my memory. Like an emigrant returning after many decades to his hometown where everything has changed and he finds himself having to come to terms with the altered landscape of his youth.”

Even if we don’t know Ferri’s town or Milazzo’s ghost stations, readers will identify with the imagery. The poems, as specific as the Italian town in the photos, create a view that we can sense as universal loss. In poems about them, words give us another take. “Who was this woman / looking out of her window? / so despondently, so many years ago? // Lives wither, pass like paint, stucco, / peeling from the wall . . . // she lived for many years / but only for the briefest of moments, / so young and suddenly so old, now nothing more / than a specter among shadows . . .” (“Still I Ask and Wonder”).

Milazzo writes three ghost station poems. “Ghost Stations II” concerns a lady “for we believed only in a democracy of caresses – / lapping tongues, limbs plumbing / the deepest recesses, the part of the heart / that could be seen only in the dark.” Although the poet is immensely critical of the corrupt ways of the world, he has a sharp wit. “I was an East Berliner / who did not believe in the East, / she was a West Berliner / who did not believe in the West, // We defined democracy / only in the most caustic forms of self-critique.”

Several texts are based on the thirty-three photographs as well as on various places Milazzo knows (“Dachau”) and that no one knows (“Tower of Babel”). Six poems are translated into Italian, as are Milazzo’s introduction and Ferri’s note on his photos. There are several fine poems and Ferri’s powerful photos, which will make readers keep the book near.